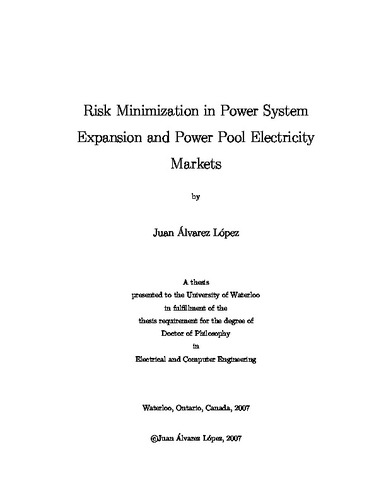 Centralized power system planning covers time windows that range from ten to thirty years. Consequently, it is the longest and most uncertain part of power system economics. One of the challenges that power system planning faces is the inability to accurately predict random events; these random events introduce risk in the planning process. Another challenge stems from the fact that, despite having a centralized planning scheme, generation plans are set first and then transmission expansion plans are carried out. This thesis addresses these problems. A joint model for generation and transmission expansion for the vertically integrated industry is proposed. Randomness is considered in demand, equivalent availability factors of the generators, and transmission capacity factors of the transmission lines. The system expansion model is formulated as a two-stage stochastic program with fixed recourse and probabilistic constraints. The transmission network is included via a DC approximation. The mean variance Markowitz theory is used as a risk minimization technique in order to minimize the variance of the annualized estimated generating cost. This system expansion model is capable of considering the locations of new generation and transmission and also of choosing the right mixture of generating technologies. The global tendency is to move from regulated power systems to deregulated power systems. Power pool electricity markets, assuming that the independent system operator is concerned with the social cost minimization, face great uncertainties from supply and demand bids submitted by market participants. In power pool electricity markets, randomness in the cost and benefit functions through random demand and supply functions has never been considered before. This thesis considers as random all the coefficients of the quadratic cost and benefit functions and uses the mean variance Markowitz theory to minimize the social cost variance. The impacts that this risk minimization technique has on nodal prices and on the elasticities of the supply and demand curves are studied. All the mathematical models in this thesis are exemplified by the six-node network proposed by Garver in 1970, by the 21-node network proposed by the IEEE Reliability Test System Task Force in 1979, and by the IEEE 57- and 118-node systems.