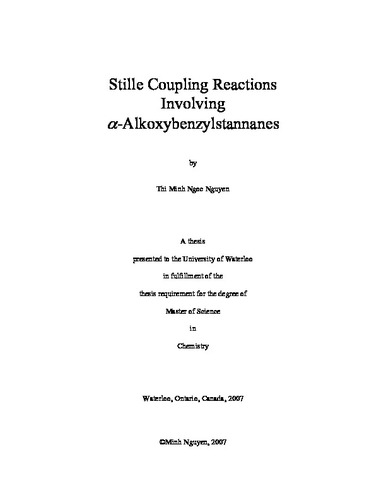 The Stille reaction has established itself as one of the two most general and most selective palladium-catalyzed cross-coupling reactions, along with the Suzuki cross-coupling of organoboron compounds. The Stille coupling of α-alkoxystannanes is a relatively unexplored area. A previous study showed that an α-alkoxyalkylstannane could be coupled with benzoyl chloride with retention of configuration. However, our group has recently shown that Stille couplings of sulfonamidobenzylstannanes proceeds with inversion of configuration. In order to determine whether the Stille coupling reaction of α-alkoxybenzylstannanes proceeds with inversion or retention, the stereochemistry in the Stille reaction of α-alkoxybenzylstannanes was studied. Optimized conditions for Stille coupling of α-alkoxybenzyl-tributylstannanes with benzoyl chloride were developed: highest yields were observed using Pd2dba3 and PPh3 in toluene. Enantiomerically enriched α-hydroxystannanes were obtained via chromatographic resolution of diastereomeric carbamate derivatives. An X-ray crystal structure was obtained for the 3,5-dinitrobenzoate derivative of (S)-1-hydroxyphenylmethyl-trimethylstannane. Stille coupling (cat. Pd2dba3, PPh3, toluene) of the corresponding acetate with benzoyl chloride provided the acetate of (R)-benzoin thus establishing retention of configuration under these reaction conditions.