Studies on Trade-off Between Throughput and Reliability in Wireless Systems 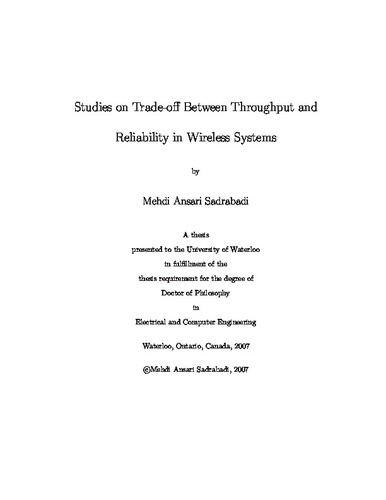 In the first part of the thesis, we study the trade-off between the transmission reliability and data rate in high signal-to-noise ratio regime in ad-hoc wireless networks. Bandwidth allocation plays a significant role in this trade-off, since dividing bandwidth reduces the number of users on each band and consequently decreases the interference level, however it also decreases the data rate. Noting that the interference power is substantially influenced by the network density, this trade-off introduces a measure for appropriate bandwidth allocation among users considering the network density. The diversity-multiplexing trade-off is derived for a one-dimensional regular ad-hoc network. In the second part of the thesis, we study the performance of point-to-point and broadcast systems with partial channel state information at the transmitter in a time-varying environment. First, the capacity of time-varying channels with periodic feedback at the transmitter is evaluated. It is assumed that the channel state information is perfectly known at the receiver and is fed back to the transmitter at the regular time-intervals. The system capacity is investigated in two cases: i) finite state Markov channel, and ii) additive white Gaussian noise channel with time-correlated fading. In a multiuser scenario, we consider a downlink system in which a single-antenna base station communicates with single antenna users, over a time-correlated fading channel. It is assumed that channel state information is perfectly known at each receiver, while the rate of channel variations and the fading gain at the beginning of each frame are known to the transmitter. The asymptotic throughput of the scheduling that transmits to the user with the maximum signal to noise ratio is examined applying variable code rate and/or variable codeword length signaling. It is shown that by selecting a fixed codeword length for all users, the order of the maximum possible throughput (corresponding to quasi-static fading) is achieved.