Characterization of iron- and zinc-containing alcohol dehydrogenases from anaerobic hyperthermophiles 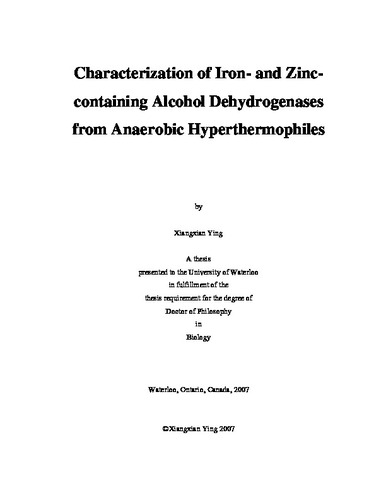 Hyperthermophiles are microorganisms that can grow at temperatures close to the boiling point of water or above. They are potential resources of thermostable enzymes including alcohol dehydrogenases (ADHs). Both Thermococcus guaymasensis and Thermotoga hypogea produce ethanol as an end product using glucose as substrate. However, the metabolic pathway and enzymes involved in alcohol production by these hyperthermophiles were not clear. ADH is a key enzyme responsible for alcohol metabolism, and the enzyme has been purified and characterized. T. hypogea is an extremely thermophilic anaerobic bacterium capable of growing at 90°C. The NADP+-dependent ADH from T. hypogea was purified to homogeneity and a homodimeric protein with a subunit size of 40 ± 1 kDa. A part of its encoding gene was cloned and sequenced, from which a major part of the amino acid sequence of the enzyme was deduced and found to have high similarities to iron-containing ADHs from other Thermotoga species and harbored typical iron and NADP+-binding motifs. The conserved domain search showed that T. hypogea ADH was a member of the family of uncharacterized iron-containing ADHs. The iron content of the enzyme was determined to be 1.02 ± 0.06 g-atoms per subunit. It is the first characterized iron-containing ADH from hyperthermophilic bacteria. Similar to known iron-containing ADHs, T. hypogea ADH was oxygen sensitive; however, the loss of enzyme activity upon exposure to oxygen could be recovered by incubation with dithiothreitol and Fe2+. The enzyme was thermostable with a half-life of about 10 h at 70°C, and its catalytic activity increased along with the rise of temperatures up to 95°C. Optimal pH values for the production and oxidation of alcohol were determined to be 8.0 and 11.0, respectively. The enzyme had a broad specificity in utilizing primary alcohols and aldehydes as substrates. Apparent Km values for ethanol and 1-butanol were much higher than that for acetaldehyde and butyraldehyde and thus the enzyme was likely to catalyze the reduction of aldehydes to alcohols in vivo. T. guaymasensis is a hyperthermophilic anaerobic archaeon capable of catalyzing the starch degradation and producing ethanol and acetoin as end-products. The purified T. guaymasensis ADH was an NADP+-dependent homotetramer with a subunit of 40 ± 1 kDa. The enzyme was a primary-secondary ADH, but it exhibited substrate preference on secondary alcohols and corresponding ketones. In particular, it catalyzed the reduction of diacetyl to 2, 3-butanediol via acetoin in which the reduction from diacetyl to acetoin was irreversible. For the oxidation of 2, 3-butanediol, the enzyme exhibited higher activities on (2R, 3R)-(-)-2, 3-butanediol and meso-2, 3-butanediol than (2S, 3S)-(+)-2, 3-butanediol while the stereoselective reduction of racemic (R/S)-acetoin produced (2R, 3R)-(-)-2, 3-butanediol and meso-butanediol but not (2S, 3S)-(+)-2, 3-butanediol. The optimal pHs for the oxidation and formation of alcohols were determined to be 10.5 and 7.5, respectively. The enzyme activity increased along with the rise of temperatures up to 95°C, and it was highly stable with a half-life of 24 hours at 95°C. The enzyme was resistant to 30% (v/v) methanol (retaining 40% of its full activity). NADPH for the ketone reduction was efficiently regenerated using isopropanol as a substrate. The apparent Km value for NADPH was 40 times lower than that of NADP+, and the specificity constant with NADPH were 5 times higher than that of NADP+. Therefore, the physiological role of the enzyme was likely to be responsible for the reactions involving the NADPH oxidation–coupled formation of ethanol and/or acetoin. The fully active T. guaymasensis ADH contained 0.9 ± 0.03 g atom zinc per subunit determined by inductively coupled plasma mass spectrometry (ICP-MS) and was the first characterized zinc-containing ADH from Thermococcus species. The gene encoding this enzyme was cloned and sequenced, and the deduced amino acid sequence contained 364 amino acids showing high similarities (85%) to those ADHs from Thermoanaerobacter species which have only the catalytic zinc atom. The motif analyses also indicated the enzyme lacked of the structural zinc-binding motif; thus, zinc might play a catalytic role in the enzyme. Further analyses showed the presence of the conserved domains of L-threonine dehydrogenases; however, the enzyme could not oxidize L-threonine or L-serine. Distinct from most of zinc-containing ADHs, the enzyme activity was almost fully inhibited by 100 μM Zn2+ in the assay mixture. Moreover, it was sensitive to oxygen. An NADP+-dependent ADH was purified from the hyperthermophilic anaerobic archaeon Thermococcus strain ES1, an ethanol producer. The recombinant enzyme over-expressed in Escherichia coli was purified using a two-step procedure including heat treatment, and characterized in comparison with the native enzyme. The purified recombinant enzyme exhibited a specific activity of 52.8 U mg-1, close to that of the native enzyme (57 U mg-1). Both native and recombinant enzymes were homotetramers with a subunit size of 45 ± 1 kDa. Their optimal pHs for the ethanol oxidation and acetaldehyde reduction were determined to be 10.5 and 7.0, respectively. Both enzymes were able to oxidize a series of primary alcohols and diols. Metal contents of the fully active recombinant enzyme were determined by ICP-MS to be 1.0 ± 0.04 g atom iron per subunit, and both iron-containing enzymes were oxygen sensitive. Their kinetic parameters showed lower Km-values of acetaldehyde and NADPH than those of ethanol and NADP+, suggesting the native enzyme could be involved in ethanol formation in vivo. The recombinant and native enzymes had almost identical characteristics and thus its encoding gene was successfully over-expressed in E. coli. The deduced amino acid sequence of the ADH from Thermococcus strain ES1 was a 406 amino acid polypeptide. Its amino acid sequence showed high identities (80%) to iron-containing ADHs from the related archaea Thermococcus zilligii and Thermococcus hydrothermalis. The conserved domain search revealed it belonged to the family of iron-containing ADHs. Moreover, the sequence of the enzyme had catalytic metal and dinucleotide-binding motifs typical for iron-containing ADHs. In conclusion, the results indicate that iron- and zinc-containing ADHs from hyperthermophiles have significant differences in terms of biophysical, biochemical and molecular properties. The hyperthermophilic bacterial and archaeal iron-containing ADHs are divergent while the zinc-containing ADH from T. guaymasensis has significant similarity to thermophilic bacterial ones.