Quantifying the Frequency and Orientation of Mitoses in Embryonic Epithelia 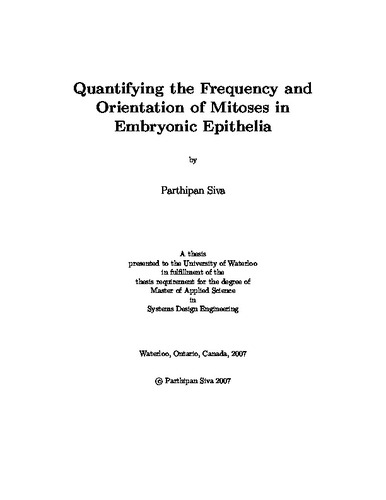 The miraculous birth of a new life starts by the formation of an embryo. The process by which an embryo is formed, embryogenesis, has been studied and shown to consist of three types of processes: mitosis, cell differentiation and morphogenetic movements. Scientists and medical doctors are still at a loss to explain the fundamental forces driving embryo development and the causes of birth defects remain largely unknown. Recent efforts by the Embryo Biomechanics Lab at the University of Waterloo have shown a relationship between morphogenetic movements that occur during embryo formation and the frequency and orientation of mitosis. To further study this relationship a means of automatically identifying the frequency and orientation of mitosis on time-lapse images of embryo epithelia is needed. Past efforts at identifying mitosis have been limited to the study of cell cultures and stained tissue segments. Two methods for identifying mitosis in contiguous sheets of cells are developed. The first method is based on local motion analysis and the second method is based on intensity analysis. These algorithms were tested on images of early and late stage embryos of the axolotl (Ambystoma mexicanum), a type of amphibian. The performance of the algorithms were measured using the F-Measure. The F-Measure determines the performance of the algorithm as the true mitosis detection rate penalized by the false mitosis detection rate. The motion based algorithm had performance rates of 68.2% on an early stage image set and 66.7% on a late stage image set, whereas the intensity based algorithm had a performance rates of 73.9% on early stage image set and 90.0% on late stage image set. The mitosis orientation errors for the motion based algorithm were 27.3 degrees average error with a standard deviation (std.) of 19.8 degrees for early stage set and 34.8 degrees average error with a std. of 23.5 degrees for the late stage set. For the intensity based algorithm the orientation errors were 39.8 degrees average with std. of 28.9 degrees for the early stage image set and 15.7 degrees average with std. of 18.9 degrees for the late stage image set. The intensity based algorithm had the best performance of the two algorithms presented, and the intensity based algorithm performs best on high-magnification images. Its performance is limited by mitoses in adjacent cells and by the presence of natural cell pigment variations. The algorithms presented here offer a powerful new set of tools for evaluating the role of mitoses in embryo morphogenesis.