Functional Characterization of Arcanobacterium pyogenes Pyolysin in an Oligomeric Form, and the Binding of CAMP Factor to IgG. 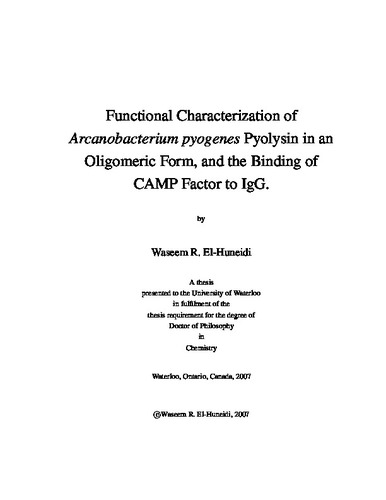 The work described in this thesis deals with two pore forming toxins, namely Arcanobacterium pyogenes pyolysin and Streptococcus agalactiae CAMP factor. Pyolysin (PLO) belongs to the homologous group of cholesterol-dependent cytolysins. In chapter 2, it is shown that PLO can form small oligomers in solution, without the requirement for any membranes or membrane lipids. These small oligomers may aggregate into larger ones on membranes; however, in solution, they apparently do not grow by addition of further monomers, as their size is virtually unaffected by variations of incubation time or toxin concentration. The small, solution-derived oligomers retain hemolytic activity. The membrane lesions observed by electron microscopy are similar to those that are formed by monomeric PLO, except that they are mostly incomplete and arc-shaped, as opposed to the predominantly ring-shaped ones formed by monomeric PLO when directly incubated with membranes. This structural difference corresponds to a detectable difference in functional pore size, as determined by marker release experiments. Thus, arc-shaped PLO oligomers may form functional pores of reduced size. In chapter 3, we show that liposomes that contain phosphatidylcholine and ceramide but no cholesterol or other sterol are susceptible to the cholesterol-dependent cytolysin pyolysin. Pyolysin, at a low rate, forms small oligomers in solution. The solution-derived oligomers are more effective on ceramide-containing liposomes than the monomeric toxin. In contrast, they have much lower activity on liposome membranes that contain cholesterol but no ceramide. Our findings therefore show that at least one member of the ‘cholesterol-dependent cytolysins’ is in fact not strictly dependent on the sterol. In addition, in conjunction with previous data, they suggest that the requirement for cholesterol involves early or intermediate stages of oligomer formation, rather than the final event of membrane insertion. Chapter 4 of this thesis concerns Streptococcus agalactiae CAMP factor. CAMP factor has previously been reported to bind the Fc fragments of immunoglobulin G (IgG) and has therefore also been called ‘protein B’, in analogy to protein A of Staphylococcus aureus. We attempted to characterize the interaction of protein B with IgG in more detail. In contrast to protein A, CAMP factor does not inhibit the activation of complement by hemolysin antibodies bound to sheep red cell surfaces. IgG also failed to inhibit the cohemolytic activity of CAMP factor, which it displays on sphingomyelinase-treated sheep red cells; this is in disagreement with previous findings. After co-incubation, CAMP factor and IgG were cleanly separated by gel filtration. Therefore, CAMP factor does not detectably bind to IgG.

Waseem El-Huneidi (2007). Functional Characterization of Arcanobacterium pyogenes Pyolysin in an Oligomeric Form, and the Binding of CAMP Factor to IgG.. UWSpace. http://hdl.handle.net/10012/3432