Confronting the intractable: An evaluation of the Seeds of Peace experience 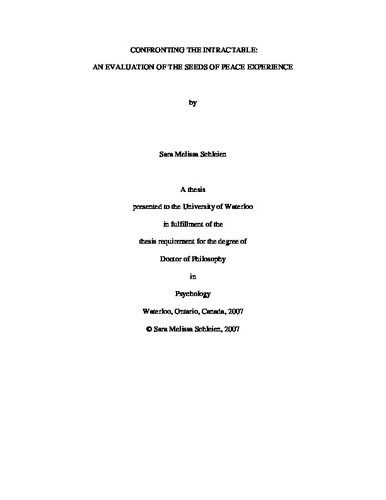 This study investigated the impact of participation in the Seeds of Peace International Summer Camp program on attitudes toward perceived enemies and in-group members. Specifically, individuals’ social dominance orientation, stereotype attributions, closeness to own and out-group members, attitudes about peace, beliefs about ability to think independently and ideas about how to facilitate peace were examined. Three groups of adolescents were studied: Israeli, Palestinian and Non-Palestinian Arab campers who came from Jordan and Egypt. Two hundred and forty eight adolescents between the ages of 14 and 17 participated in Study 1, and a 62 participant sub-sample of the original group participated in the follow up study. The two studies together revealed several important findings. The results from Study 1 suggest that the experience of participating in the Seeds of Peace camp program is effective for fostering feelings of closeness to the out-group, and for evaluating the other side’s attitudes toward peacemaking more positively. Results also suggested that cognitively-oriented ratings, such as stereotypes of warmth and competence, were more resistant to change. The results of the follow up study conducted ten months after camp had ended were mixed. Generally, out-group evaluations became less positive, although there was some maintenance of effects. The present research supports previous findings that the use of coexistence programs as a means to improve intergroup relations is generally beneficial in the short term. The results also highlighted the importance of the experience of participating in the Seeds of Peace camp program to changing the beliefs held about perceived enemies. The significant contributions of the current research include underlining the importance of intergroup contact, the experience of living with perceived enemies, and becoming ready to listen to the other side, in order to change beliefs held about them.

Sara Melissa Schleien (2007). Confronting the intractable: An evaluation of the Seeds of Peace experience. UWSpace. http://hdl.handle.net/10012/3431