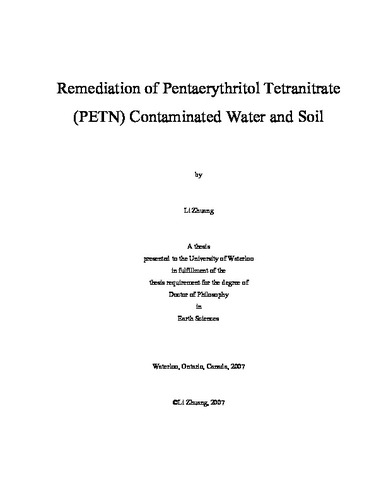 Pentaerythritol tetranitrate (PETN), a nitrate ester, is widely used as a powerful explosive and is classified as a munitions constituent of great concern by DoD in U.S.A. It is an environmental concern and poses a threat to ecosystem and human health. Our objective was to examine potential remediation strategies for both PETN-contaminated water and soil. Flow-through iron columns were used to determine the potential for using granular iron to degrade PETN in aqueous phase. PETN transformation in both a 100% iron column and a 30% iron and 70% silica sand column followed pseudo-first-order kinetics, with average half-lives of 0.26 and 1.58 minutes, respectively. Based on the identified intermediates and products, the reaction pathway was proposed to be a sequential denitration process, in which PETN was stepwisely reduced to pentaerythritol with the formation of pentaerythritol trinitrate (PETriN) and pentaerythritol dinitrate (PEDN). Although pentaerythrito mononitrate was not detected, an approximately 100% nitrogen mass recovery indicated that all nitro groups were removed from PETN. Nitrite was released in each denitration step and subsequently reduced to NH4+ by iron. Nitrate was not detected during the experiment, suggesting that hydrolysis was not involved in PETN degradation. Furthermore, batch experiments showed that PETN dissolution was likely a rate-limiting factor for PETN degradation, especially in the case with high amount of iron. Using 50% methanol as a representative co-solvent, PETN solubility was greatly enhanced and thus the removal efficiency was improved. The results demonstrate the use of granular iron to remediate PETN-contaminated water. The biodegradability of aqueous PETN was examined with a mixed microbial culture from a site contaminated with PETN. The mixed culture was enriched and selected using a mineral medium containing acetate and yeast extract as carbon and nutrient sources in the presence of nitrate or sulfate. The final enrichment cultures were used as inocula for studying PETN biodegradation under nitrate-reducing and sulfate-reducing conditions. In addition, PETN degradation was tested using the original microbial culture under the mixed electron acceptor conditions of nitrate and sulfate. The results showed that under all conditions tested, PETN was sequentially reduced, apparently following the same pathway as the abiotic reduction by granular iron. Pentaerythritol mononitrate, a suspected intermediate in the abiotic degradation by iron, was identified in this experiment. The presence of nitrate seemed not to affect the kinetics of PETN degradation, with both PETN and nitrate degrading simultaneously. However, the rate of nitrate reduction was much faster than PETN degradation. With respect to sulfate, its presence did not have an adverse effect on PETN degradation, indicated by the very similar degradation rates of PETN in the presence and absence of sulfate. Under all conditions, PETN appeared to act as a terminal electron acceptor for energy generation during biodegradation. A utilization sequence by bacteria in the order of nitrate, PETN, PETriN, PEDN and sulfate was clearly observed. The study in this phase demonstrated that under anaerobic conditions, with carbon sources provided, PETN can be effectively biodegraded by indigenous bacteria in contaminated soil, most likely by denitrifying bacteria. Based on the successful demonstration of abiotic and biotic degradation of PETN in the aqueous phase, both methods were further tested for remediating PETN-contaminated soil in both laboratory and pilot scale. In the laboratory, a systematic soil microcosm experiment was conducted using soil from a contaminated site and additions of either granular iron or organic materials, with deoxygenated Millipore water. Because of the high concentration in the contaminated soil, solid-phase of PETN was initially present in the microcosms. Two types of DARAMEND products, D6390Fe20 (containing 20% iron + 80% botanical materials) and ADM-298500 (100% botanical materials), were used as sources of carbon and other nutrients. During the 84-day incubation period, more than 98% was removed in all DARAMEND treatments, following pseudo-first-order kinetics with half-lives ranging between 8 and 18 days. The results clearly demonstrated that PETN can be effectively degraded under anaerobic conditions with the addition of carbon and possibly nutrients. As in the aqueous tests, the sequence of microbial utilization was nitrate followed by PETN and sulfate. In contrast to the tests with aqueous PETN, iron was not effective in removing PETN in the contaminated soil, due to iron passiviation caused by the presence of high levels of nitrate in the soil. In addition, a slight enhancement was observed in a combined system of iron and biodegradation over biodegradation only. However, the extent of enhancement is not believed to be significant relative to the extra cost for iron addition. A pilot scale test was conducted at a PETN-contaminated site at Louviers, CO, a waste pond which had received waste water from PETN manufacture for over 20 years. The test involved 10 treatments, one control without amendment, one amended with iron (10%), eight with different types and amounts of organic carbon (1%, 2% and 4% of D6390Fe20; 2% and 4% of ADM-298500 and 1%, 2% and 4% of brewers grain). Each treatment was performed in a plastic tub (45 cm wide × 90 cm long × 25 cm deep), containing approximately 18 cm thick layer of soil and 6-8 cm of standing water. Over 74 days, very little consistent reduction of PETN was found in the iron treatment, which was also due to iron passivation in the presence of nitrate in the soil. In contrast, significant removal of PETN (11,200 to 33,400 mg/kg) was observed in the treatments amended with organic materials, and the extent of removal increased with increasing amounts of organic materials. The pilot test was consistent with the results of the laboratory experiments for iron and biodegradation with carbon addition. For biological treatment, the stoichiometric estimation suggests that the complete remediation in many of the treatments will be ultimately limited by carbon sources. Results of this study showed the great potentials of using granular iron to degrade PETN in solution and using indigenous bacteria present in contaminated soils to biodegrade PETN in both the solution and soil phase. Both iron and biodegradation with carbon addition represent viable approaches for remediation of PETN-contaminated water and soil, though iron may not be appropriate in the presence of high concentration of nitrate.