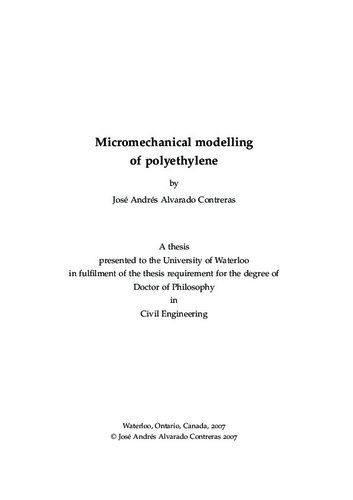 The increasing use of polyethylene in diverse applications motivates the need for understanding how its molecular properties relate to the overall behaviour of the material. Although microstructure and mechanical properties of polymers have been the subject of several studies, the irreversible microstructural rearrangements occurring at large deformations are not completely understood. The purpose of this thesis is to describe how the concepts of Continuum Damage Mechanics can be applied to modelling of polyethylene materials under different loading conditions. The first part of the thesis consists of the theoretical formulation and numerical implementation of a three-dimensional micromechanical model for crystalline polyethylene. Based on the theory of shear slip on crystallographic planes, the proposed model is expressed in the framework of viscoplasticity coupled with degradation at large deformations. Earlier models aid in the interpretation of the mechanical behaviour of crystalline polyethylene under different loading conditions; however, they cannot predict the microstructural damage caused by deformation. The model, originally due to Parks and Ahzi (1990), was further developed in the light of the concept of Continuum Damage Mechanics to consider the original microstructure, the particular irreversible rearrangements, and the deformation mechanisms. Damage mechanics has been a matter of intensive research by many authors, yet it has not been introduced to the micromodelling of semicrystalline polymeric materials such as polyethylene. Regarding the material representation, the microstructure is simplified as an aggregate of randomly oriented and perfectly bonded crystals. To simulate large deformations, the new constitutive model attempts to take into account existence of intracrystalline microcracks. The second part of the work presents the theoretical formulation and numerical implementation of a three-dimensional constitutive model for the mechanical behaviour of semicrystalline polyethylene. The model proposed herein attempts to describe the deformation and degradation process in semicrystalline polyethylene following the approach of damage mechanics. Structural degradation, an important phenomenon at large deformations, has not received sufficient attention in the literature. The modifications to the constitutive equations consist essentially of introducing the concept of Continuum Damage Mechanics to describe the rupture of the intermolecular (van der Waals) bonds that hold crystals as coherent structures. In order to model the mechanical behaviour, the material morphology is simplified as a collection of inclusions comprising the crystalline and amorphous phases with their characteristic average volume fractions. In the spatial arrangement, each inclusion consists of crystalline material lying in a thin lamella attached to an amorphous layer. To consider microstructural damage, two different approaches are analyzed. The first approach assumes damage occurs only in the crystalline phase, i.e., degradation of the amorphous phase is ignored. The second approach considers the effect of damage on the mechanical behaviour of both the amorphous and crystalline phases. To illustrate the proposed constitutive formulations, the models were used to predict the responses of crystalline and semicrystalline polyethylene under uniaxial tension and simple shear. The numerical simulations were compared with experimental data previously obtained by Bartczak et al. (1994), G‘Sell and Jonas (1981), G‘Sell et al. (1983), Hillmansen et al. (2000), and Li et al. (2001). Our model’s predictions show a consistently good agreement with the experimental results and a significant improvement with respect to the ones obtained by Parks and Ahzi (1990), Schoenfeld et al. (1995), Yang and Chen (2001), Lee et al. (1993b), Lee et al. (1993a), and Nikolov et al. (2006). The newly proposed formulations demonstrate that these types of constitutive models based on Continuum Damage Mechanics are appropriate for predicting large deformations and failure in polyethylene materials.