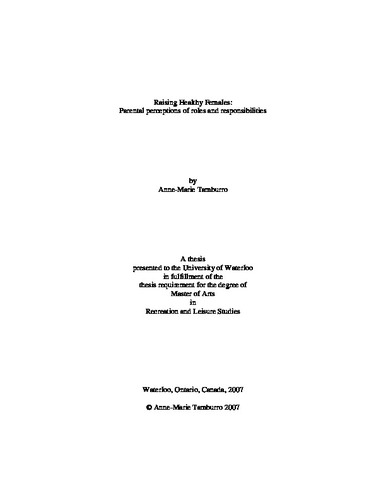 Within North America, more children are being classified as overweight and obese than ever before. Despite this alarming finding, limited research has been conducted on parents’ views of their children’s health in addition to their role in providing their children with a healthy lifestyle The purpose of this qualitative investigation was to explore parents’ perceptions of their daughters’ healthy lifestyle, including their perceptions of their roles and responsibilities as parents. Participants were recruited from three Girl Guides of Canada Brownie Units in South-Western Ontario. Ten semi-structured, audio-taped interviews were conducted. All of the parents who volunteered to participate were middle class, well-educated, heterosexual, married and/ or common-law and had two to three children. Among those who were interviewed, one married couple took part together, and the remaining eight mothers and one father took part in individual interviews. Many of the participants had experienced problems with maintaining a healthy weight themselves and/or healthy lifestyle in the past. A phenomenological approach was taken by following Hychner’s (1985) steps, including; bracketing my assumptions, listening for a sense of the ‘whole’, delineating units of general meaning, eliminating redundancies and outlining themes that captured the essence of lives experience for parents. Similar to Mannell and Kleiber’s (1997) findings, participants in this study played an influential role in helping their children develop healthy behaviours that would carry on throughout their lives. All of the mothers and fathers interviewed were involved parents and were very committed to instilling healthy behaviors in their daughters. In line with Hays (1996) and Warner (2005), mothers in this study adopted ‘intensive mothering roles’ and fathers’ behaviors reflected ‘involved parenting’ roles. Participants in this study deemed physical, mental and psychological health as important factors which contribute to a healthy lifestyle, but focused most of their discussions on their roles and responsibilities in their daughters’ physical health. A strong emphasis on their daughters’ weight management was conveyed throughout interviews, as many participants, especially mothers, were concerned with their daughter’s perception of body image and self-esteem. As they embraced their parental duties, they acted as role models to their children and spent time during family leisure activities and family meals teaching their daughters about the importance of physical activity and nutrition. Similar to Shaw and Dawson’s (2001) study, family leisure was seen as purposive, with a strong focus placed on health. Parents in this study made their daughters’ health a top priority by investing their time and finances for this goal, while remaining firm and consistent in encouraging healthy behaviours in their children. Despite the time and effort devoted to providing healthy lifestyles, many participants felt insecure and questioned whether or not they were doing enough. These characteristics displayed by participants were similar to Warner’s (2005) concept of ‘professionalization of parenthood’. This study has provided valuable insight to the fields of Recreation and Leisure Studies, Family Studies, and Obesity Prevention literature.