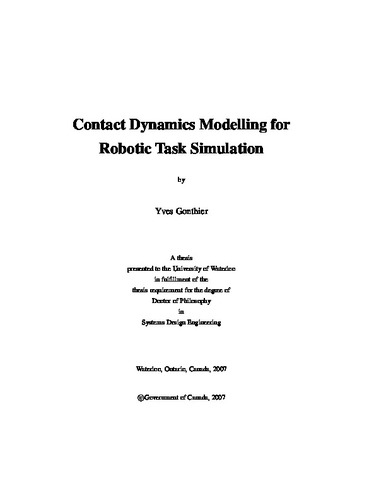 This thesis presents the theoretical derivations and the implementation of a contact dynamics modelling system based on compliant contact models. The system was designed to be used as a general-purpose modelling tool to support the task planning process space-based robot manipulator systems. This operational context imposes additional requirements on the contact dynamics modelling system beyond the usual ones of fidelity and accuracy. The system must not only be able to generate accurate and reliable simulation results, but it must do it in a reasonably short period of time, such that an operations engineer can investigate multiple scenarios within a few hours. The system is easy to interface with existing simulation facilities. All physical parameters of the contact model can be identified experimentally or can be obtained by other means through analysis or theoretical derivations based on the material properties. Similarly, the numerical parameters can be selected automatically or by using heuristic rules that give an indication of the range of values that would ensure that the simulations results are qualitatively correct. The contact dynamics modelling system is comprised of two contact models. On one hand, a point contact model is proposed to tackle simulations involving bodies with non-conformal surfaces. Since it is based on Hertz theory, the contacting surfaces must be smooth and without discontinuity, i.e., no corners or sharp edges. The point contact model includes normal damping and tangential friction and assumes the contact surface is very small, such that the contact force is assumed to be acting through a point. An expression to set the normal damping as a function of the effective coefficient of restitution is given. A new seven-parameter friction model is introduced. The friction model is based on a bristle friction model, and is adapted to the context of 3-dimensional frictional impact modelling with introduction of load-dependent bristle stiffness and damping terms, and with the expression of the bristle deformation in vectorial form. The model features a dwell-time stiction force dependency and is shown to be able to reproduce the dynamic nature of the friction phenomenon. A second contact model based on the Winkler elastic foundation model is then proposed to deal with a more general class of geometries. This so-called volumetric contact model is suitable for a broad range of contact geometries, as long as the contact surface can be approximated as being flat. A method to deal with objects where this latter approximation is not reasonable is also presented. The effect of the contact pressure distribution across the contact surface is accounted for in the form of the rolling resistance torque and spinning friction torque. It is shown that the contact forces and moments can be expressed in terms of the volumetric properties of the volume of interference between the two bodies, defined as the volume spanned by the intersection of the two undeformed geometries of the colliding bodies. The properties of interest are: the volume of the volume of interference, the position of its centroid, and its inertia tensor taken about the centroid. The analysis also introduces a new way of defining the contact normal; it is shown that the contact normal must correspond to one of the eigenvectors of the inertia tensor. The investigation also examines how the Coulomb friction is affected by the relative motion of the objects. The concept of average surface velocity is introduced. It accounts for both the relative translational and angular motions of the contacting surfaces. The average surface velocity is then used to find dimensionless factors that relate friction force and spinning torque caused by the Coulomb friction. These latter factors are labelled the Contensou factors. Also, the radius of gyration of the moment of inertia of the volume of interference about the contact normal was shown to correlate the spinning Coulomb friction torque to the translational Coulomb friction force. A volumetric version of the seven-parameter bristle friction model is then presented. The friction model includes both the tangential friction force and spinning friction torque. The Contensou factors are used to control the behaviour of the Coulomb friction. For both contact models, the equations are derived from first principles, and the behaviour of each contact model characteristic was studied and simulated. When available, the simulation results were compared with benchmark results from the literature. Experiments were performed to validate the point contact model using a six degrees-of-freedom manipulator holding a half-spherical payload, and coming into contact with a flat plate. Good correspondence between the simulated and experimental results was obtained.