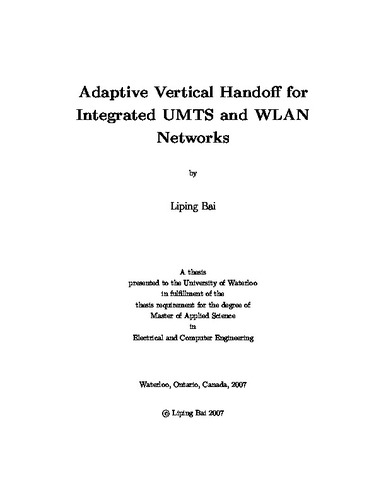 Next-generation wireless networks have been envisioned to be an integration of heterogeneous wireless access networks such as UMTS (Universal Mobile Telecommunication Networks) and the IEEE 802.11 based WLAN (Wireless Local Area Networks). It is an important and challenging issue to support seamless vertical handoff management in such an integrated architecture that provides the mobile users uninterrupted service continuity anywhere, any time. In such a networking environment, the signaling delay of the vertical handoff is not fixed due to the traffic load in the backbone Internet, wireless channel quality and the distance between a mobile node and its home network. However, the currently handoff solutions implicitly considers the signaling delay as a constant value. In this thesis, we study a typical link layer assisted handoff, identifying its deficiency due to the considerably large handoff delay. We propose an adaptive vertical handoff management scheme for integrated UMTS and WLAN networks. The proposed scheme incorporates the idea of pre-handoff with adaptive handoff threshold. We estimate the handoff signaling delay in advance, therefore, providing the delay information required for making an adaptive handoff decision. Instead of setting a fixed threshold, an adaptive handoff threshold value is determined for every single MN based on the estimated handoff signaling delay. The RSS and the RSS's rate of change are used to determine the estimated handoff time instant. Extensive simulation has been conducted to verify the performance of the proposed handoff scheme.