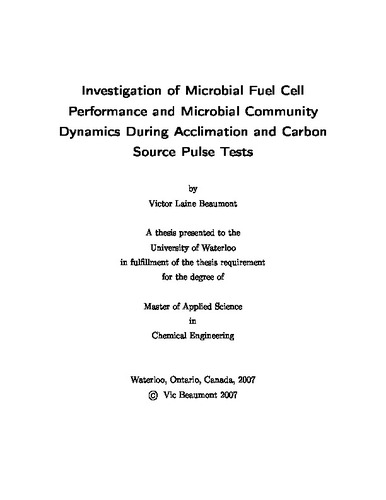 Microbial fuel cells were designed and operated using waste activated sludge as a substrate and as a source of microorganisms for the anodic chamber. Waste activated sludge provided a bacterial consortium predisposed to the solubilization of particulate matter and utilization of substrates commonly found in wastewater. Dissolved oxygen and ferricyanide were used as the electron acceptors in the catholytes. Microbial fuel cell comparisons were made while operating under identical conditions but using the two different electron acceptors. Comparisons were based on the electricity production observed during MFC operation, wastewater quality of the waste activated sludge anolytes and the community level physiological profiling of the microbial communities in the anolytes. Electrons liberated during substrate utilization in the anodic chamber traveled to the cathodic chamber where they reduced the electron acceptors. The anode and cathode chambers were connected by a Nafion ® proton exchange membrane to allow for cation migration. Various soluble carbon sources were dosed to the microbial fuel cells at measured intervals during operation via direct injection to the anolyte. During bovine serum albumin dosing, average power production levels reached 0.062 mW and 0.122 mW for the dissolved oxygen microbial fuel cell and the ferricyanide microbial fuel cell, respectively. These were 100% and 25% greater than the power production levels observed throughout the rest of the study. Increases in current production were observed following the dosing of sodium acetate, glucose and bovine serum albumin. No increase in current was observed following glycerol dosing. Sodium acetate dosing triggered an immediate response, while glucose and bovine serum albumin responded in approximately 2 minutes. A chemical oxygen demand mass balance was calculated for both microbial fuel cells. The lack of balance closure was attributed to unmeasured methane production. An accumulation of particulate waste activated sludge components was observed for both microbial fuel cells. The anolyte pH during operation was typically less than waste activated sludge pH, which was attributed to volatile fatty acid accumulation in the anolytes during fermentation processes. Community level physiological profiling was accomplished through the analysis of ecological data obtained with BIOLOG ® ECOplates. Samples were plated and analyzed under anaerobic conditions, mimicking the environment in the anode chamber of the MFCs. ECOplate data were transformed by a logarithmic function prior to principle component analysis. The community level physiological profiling indicated that shifts in the microbial community profile, as measured through the carbon source utilization patterns, occurred throughout acclimation and following the dosing of various carbon source substrates. Shifts due to glycerol dosing differed from shifts due to the dosing of sodium acetate, glucose and bovine serum albumin.