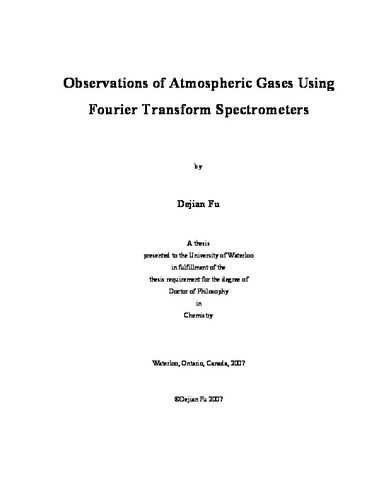 Remote sensing of atmospheric gases improves our understanding of the state and evolution of the Earth’s environment. At the beginning of the thesis, the basic principles for the retrieval of concentrations of atmospheric gases from spectra are presented with a focus on ground-based observations. An overview of the characteristic features of different platforms, viewing geometries, measurement sites, and Fourier Transform Spectrometers (FTSs) used in the measurements are provided. The thesis covers four main projects. The first study of the global distribution of atmospheric phosgene was carried out using a total of 5614 measured profiles from the satellite-borne Atmospheric Chemistry Experiment FTS (ACE-FTS) spanning the period February 2004 through May 2006. The phosgene concentrations display a zonally symmetric pattern with the maximum concentration located approximately over the equator, at about 25 km in altitude, and the concentrations decrease towards the poles. A layer of enhanced concentration of phosgene spans the lower stratosphere at all latitudes, with volume mixing ratios of 20-60 pptv. The reasons for the formation of the phosgene distribution pattern are explained by the insolation, lifetime of phosgene and the Brewer-Dobson circulation. The ACE observations show lower phosgene concentrations in the stratosphere than were obtained from previous observations in the 1980s and 1990s due to a significant decrease in source species. The Portable Atmospheric Research Interferometric Spectrometer for the Infrared (PARIS-IR) is a copy of the ACE-FTS that was designed for ground-based and balloon-borne measurements. The first balloon flight was part of the Middle Atmosphere Nitrogen TRend Assessment (MANTRA) 2004 balloon payload. Some useful engineering information was obtained on the thermal performance of the instrument during the flight. As part of the MANTRA program, a ground-based inter-instrument comparison campaign was conducted with the objective of assessing instrument performance, and evaluating data processing routines and retrieval codes. PARIS-IR provides similar quality results for stratospheric species as does the University of Toronto FTS. An advanced study was carried out for the Carbon Cycle science by Fourier Transform Spectroscopy (CC-FTS) mission, which is a proposed future satellite mission to obtain a better understanding of the sources and sinks of greenhouse gases in the Earth’s atmosphere by monitoring total and partial columns of CO2, CH4, N2O, and CO in the near infrared together with the molecular O2 column. To evaluate the spectral regions, resolution, optical components, and spectroscopic parameters required for the mission, ground-based Fourier transform spectra, recorded at Kiruna, Kitt Peak, and Waterloo, were used. Dry air volume mixing ratios of CO2 and CH4 were retrieved from the ground-based observations. A FTS with a spectral resolution of 0.1 cm-1, operating between 2000 and 15000 cm-1, is suggested as the primary instrument for the mission. Further progress in improving the atmospheric retrievals for CO2, CH4 and O2 requires new laboratory measurements to improve the spectroscopic line parameters. Atmospheric observations were made with three FTSs at the Polar Environment Atmospheric Research Laboratory (PEARL) during spring 2006. The vertical column densities of O3, HCl, HNO3, HF, NO2, ClONO2 and NO from PARIS-IR, the Eureka DA8 FTS, and the ACE-FTS show good agreement. Chorine activation and denitrification in the Arctic atmosphere were observed in the extremely cold stratosphere near Eureka, Nunavut, Canada. The observed ozone depletion during the 2006 campaign was attributed to chemical removal.