Synthesis and Modification of Polymer Membranes for Pervaporation and Gas Separation 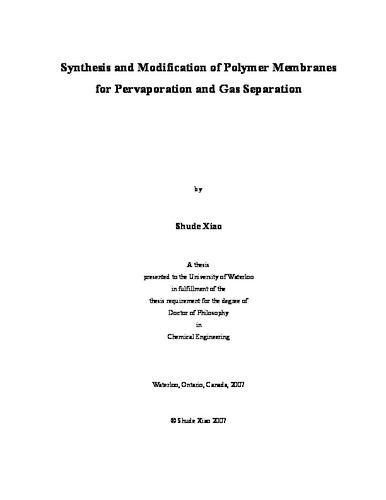 Trimesoyl chloride (TMC) crosslinked poly(vinyl alcohol) (PVA) / chitosan (CS) membranes and synthetic polyimide membranes were prepared for pervaporation dehydration of isopropanol and gas separation. PVA membranes were interfacially crosslinked with different amounts of TMC/hexane, and the degree of crosslinking was characterized by Fourier Transform Infrared Spectroscopy - Attenuated Total Reflectance Spectroscopy (FTIR-ATR) and water uptake. The asymmetric structure of the PVA-TMC membranes was revealed by FTIR-ATR. Thermal analysis was performed to understand the pyrolysis mechanism, which was supposed to be a combination of elimination of water and/or trimesic acid followed by breakage of the main chain. Water permeation and pervaporation dehydration of isopropanol were conducted, and the results showed that PVA-3TMC had the best overall pervaporation properties among the four PVA-TMC membranes studied. Sorption properties and pervaporation behavior of the PVA-3TMC membrane were investigated. The effects of water/isopropanol on the polymer matrix and the possible change of the degree of crystallinity induced by the sorbed water were believed to account for the sorption properties. For water permeation and pervaporation dehydration of isopropanol in a heating-cooling cycle, the permeation flux did not change significantly, and the selectivity was improved by the formation of crystallites during the heating run. For pervaporation in the diluting and concentrating runs at 60 °C, there was no change in the membrane permeability. Chitosan membranes were interfacially crosslinked in TMC/hexane with different crosslinking time. The membrane with a higher degree of crosslinking showed a higher degree of swelling in water at room temperature. A two-stage thermal decomposition mechanism was proposed based on thermal analyses. Pure gas permeation was performed with CO2 and N2 at room temperature, and CS-TMC-2 showed the best performance, with a CO2 permeability of ~163 Barrer and a CO2/N2 permeability ratio of ~42. Pervaporation was carried out for dehydration of isopropanol with the unconditioned and conditioned membranes, and the CS-TMC-3 membrane showed the best pervaporation performance. Pervaporation and gas separation properties were affected by the crosslinking-induced relaxation and the mobility/packing properties of the CS-TMC matrices. 4,4'-(Hexafluoroisopropylidene) diphthalic anhydride (6FDA)-based and 2,2-bis[4-(3,4-dicarboxyphenoxy) phenyl]propane dianhydride (BPADA)-based copolyimides were synthesized from one-step high-temperature polymerization in m-cresol. Polymers were characterized with Gel Permeation Chromatography (GPC), FTIR, Nuclear Magnetic Resonance Spectroscopy (NMR), Differential Scanning Calorimetry (DSC) and Thermogravimetric Analysis (TGA). Surface free energies and interfacial free energies were calculated from contact angles to characterize hydrophilicity of the polyimide membranes. Gas permeation properties of 6FDA-based copolyimide membranes were studied with N2, O2, H2, He and CO2, and pervaporation dehydration of isopropanol was performed with 6FDA-based and BPADA-based membranes. An empirical linear moiety contribution approach was proposed, and the moiety contribution factors were used to illustrate the effects of dianhydrides and diamines on permselectivities of the copolyimide membranes. Bulky side groups, flexibility of polymer main chains, structures of monomer moieties, and interactions between gas molecules and polymer chains were shown to affect gas permselectivities, while in pervaporation, both sorption and diffusion properties were affected by the interactions between penetrants and polymer matrices as well as the steric effects of monomer moieties.