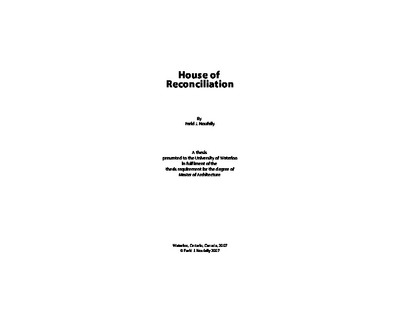 The signing of the Ta'if Agreement on October 22, 1989 marked the beginning of the end of the divisive and destructive Lebanese Civil War that had raged since 1975. The war was finally ended in March 1991, when the new Lebanese Parliament enacted the General Amnesty Law, which stated that there were to be no victors and no victims in the war ( la ghalib le maghlub). Unfortunately, this law allowed the Lebanese people to turn a blind eye to the ugly truths of the war, and it ushered in an era of uneasy silence in Lebanon. Today, as Lebanon's political battle for independence and a unified national identity continues, there is still no government supported public attempt to break this silence. I believe that this legislated lack of collective/public self-expression has rendered both the local and the Diaspora populations incapable of reconciliation with their recent traumatic past, let alone allowing them to forge a brighter future. This thesis investigates the unrelenting silence permeating every layer of Lebanese society today and proposes architectural solutions that may help to break the silence and thus reconcile Lebanese to their past. The core of this study consists of three architectural interventions aimed at breaching this silence. These are put into context through historical analysis, family interviews, and personal narratives from field research to Beirut conducted by the author in the fall of 2005, as well as photographs, maps, illustrations, and other documents drawn from first person experience. As such, this thesis probes not just the public, but also a personal experience in overcoming Lebanon's silence. Certainly, there can be no reconciliation based on silence.