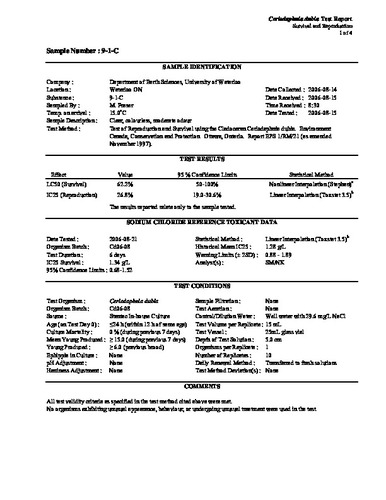 An emplaced source of coal tar creosote within the sandy Borden research aquifer has provided an opportunity to document the long term (5140 days) natural attenuation for this complex mixture. Plumes of dissolved chemicals were produced by the essentially horizontal groundwater flowing at about 9 cm/day. Eleven chemicals were extensively sampled seven times using a monitoring network of ~280 14-point multilevel samplers. A model of source dissolution using Raoult’s Law adequately predicted the dissolution of nine of eleven compounds analysed. Mass transformation has limited the extent of the plumes as groundwater flowed more than 500 m yet the plumes are no longer than 50 m. Phenol and xylenes were removed and naphthalene was attenuated from its maximum extent on day 1357. Some compound plumes reached an apparent steady state and the plumes of other compounds (dibenzofuran and phenanthrene) are expected to continue to expand due to an increasing mass flux and limited degradation potential. Biotransformation is the major process controlling natural attenuation at the site. The greatest organic mass loss is associated with the high solubility compounds. However, the majority of the mass loss for most compounds has occurred in the source zone. Oxygen is the main electron acceptor yet the amount of organics lost cannot be accounted for by aerobic mineralization or partial mineralization alone. After 10 years the source zone was treated with permanganate in situ to reduce the flux of contaminants into the dissolved plume and to permit natural attenuation to further reduce the plume extent. A sufficient mass of permanganate was injected to oxidize ~10% of the residual source. Laboratory experiments demonstrated that eight of ten of the study compounds were readily oxidized by permanganate. Once treated oxidized compounds displayed a reduced plume mass and mass discharge while they migrated through the monitoring network. Once beyond the monitoring network the mass discharge and plume mass of these compounds returned to pre-treatment trends. Non-reactive compounds displayed no significant decrease in mass discharge or plume mass. Overall the partial in situ chemical oxidation of the coal tar creosote source produced no long-term effect on the dissolved plumes emanating from the source.