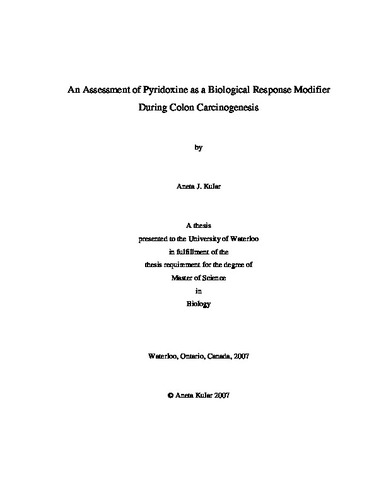 The main objective of this proposal was to investigate the effect of vitamin B6 on colon carcinogenesis in vivo. Two in vivo studies were conducted to determine the role of vitamin B6 as a biological modifier of colon carcinogenesis. It is hypothesized that vitamin B6 may serve as an antioxidant in vivo and will modulate colon carcinogenesis. In the first study, a 2X3 factorial experimental design was used to determine if three different levels of vitamin B6, classified as low, normal and high in conjunction with two different levels of protein intake, classified as normal or high, will affect post-initiation stages of colon carcinogenesis, in Sprague-Dawley rats. Male Sprague-Dawley male were injected with azoxymethane for two weeks (15mg/kg/week) and then one week later they were allocated to different dietary treatment groups. After eight weeks, the effects of dietary treatment on hematological status, oxidative stress markers and antioxidant enzymes, as well as enumeration of preneoplastic lesions, aberrant crypt foci (ACF), were evaluated. The lowest level of vitamin B6 intake with a high protein diet reduced the growth and development of ACF. Vitamin B6 had no significant effect on the oxidative stress markers. The level of protein was an important variable in modulating the levels of 3-nitrotyrosine and 8-OH-DG which were lower in high protein groups than normal protein counterparts. The objective of the second study was to investigate if a supraphysiological (5 fold higher than normal level) dosage of vitamin B6 could have an antioxidant effect in a metabolically compromised state like obesity and thereby lower the risk of colon cancer. Female Zucker obese (Zk-OB) rats received normal (Zk-OBN, 7 mg/kg) or high (Zk-OBH, 35 mg/kg) vitamin B6 (Pyridoxine-HCl) diets two weeks prior to, during and six weeks following injection with colon carcinogen AOM. The effects of supplemental vitamin B6 on hematological status, oxidative stress markers and antioxidant enzymes, as well as enumeration of ACF were carried out. High intake of vitamin B6 significantly lowered liver weights and plasma cholesterol compared to the normal intake (p≤0.05). Zk-OBH rats had significantly reduced number of ACF compared to Zk-OBN (p≤0.05). Hepatic GSH increased in the ZK-OBH group with a concomitant decrease in GPx activity. The findings demonstrate that in Zucker Obese rats, a high B6 intake augmented the antioxidant potential and decreased sensitivity to colon carcinogenesis. These findings suggest that high vitamin B6 plays an important therapeutic role in the compromised state of obesity.

Aneta Kular (2007). An Assessment of Pyridoxine as a Biological Response Modifier During Colon Carcinogenesis. UWSpace. http://hdl.handle.net/10012/3398