IN VIVO EPIGENETIC STUDY OF HISTONE ACETYLATION ASSOCIATED WITH OBESITY 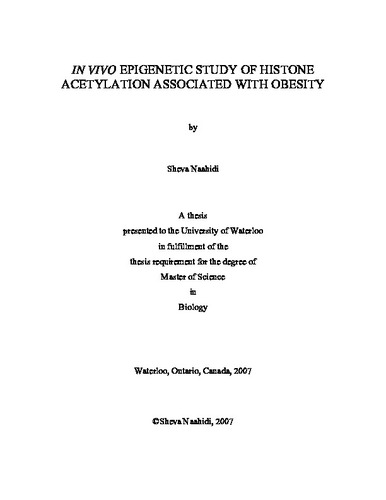 Post translational modifications in histone proteins are transmissible changes that are not coded for in the DNA sequence itself but have a significant affect in the control of gene expression. Eukaryotic transcription is a regulated process, and acetylation plays a major role in this regulation. Deranged equilibrium of histone acetylation can lead to alteration in chromatin structure and transcriptional dysregulation of genes that are involved in the control of proliferation, cell-cycle progression, differentiation and or apoptosis. Evidence shows that high glucose conditions mimicking diabetes can increase histone acetylation and augment the inflammatory gene expression. Recent advances also highlight the involvement of altered histone acetylation in gastrointestinal carcinogenesis or hyperacetylation in amelioration of experimental colitis. However, the role of histone acetylation under obesity conditions is not yet known. Therefore in the present study, western blot analysis in the liver of Zucker obese versus lean rats was performed to determine the pattern and level of H3 and H4 acetylation (both in nuclear and homogenate fractions) at specific lysine (K) in pathological state of hepatic steatosis The same technique was also applied in the liver of obese rats fed higher amounts of vitamin B6 (OH) versus those fed normal amounts of vitamin B6 (ON) to assess if hyper-acetylation can be a protective response to hepatic steatosis. In both experimental models, it was also of interest to elucidate the expression of anti- and pro- apoptotic factor Bcl-2 and Bax in respect to histone acetylation. It was observed that, in liver homogenate fractions in control animals (LC/OC), there was a higher level of histone H3 acetylation at (K9, K14) and H4 acetylation at K5 in the obese animals. In contrast, the nuclear level of H3 and H4 acetylation at the same lysine residues was considerably higher in the lean and lower in the obese animals. Obese animals contained lower liver preneoplastic lesions as well as liver weight as a result of higher amounts of vitamin B6, had significantly higher H3 acetylation at K9 and K14 and H4 acetylation at K5, in both homogenate and nuclear fractions. However, histone acetylation was not detected for histone H4 at lysine 12 (K12) in either control group (LC/OC) or obese with different B6 diet group (OH/ON). Nevertheless, global histone H3 and H4 acetylation in both homogenate and nuclear fractions, was slightly higher in the lean rats and obese rats fed higher amounts of B6. By using the western blot technique, the level of anti- and pro- apoptotic Bcl-2 and Bax were also evaluated. The moderately higher level expression of anti-apoptotic Bcl2 protein was found in lean animals, whereas the expression of pro-apoptotic Bax was significantly higher in obese animals. Furthermore, anti-apoptotic Bcl2 protein expression was slightly higher in the obese rats fed normal amounts of B6 diet; but, pro-apoptotic Bax was higher in the obese rats fed higher amounts of vitamin B6. This is the first study which shows that hyperacetylation of histones in liver nuclei can be correlated with amelioration of hepatic steatotis. Histone acetylation and B6 rich diet might be involved in the regulation of biological availability of key apoptotic proteins, which, in turn, can possibly modify the severity of the disease.