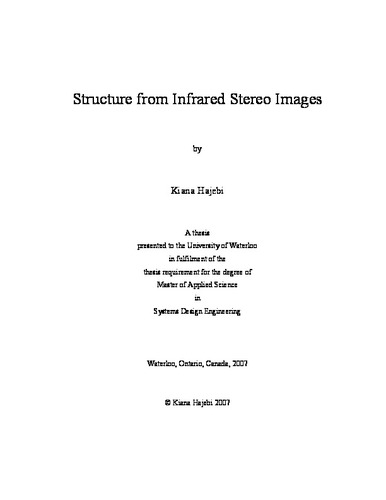 With the rapid growth in infrared sensor technology and its drastic cost reduction, the potential of application of these imaging technologies in computer vision systems has increased. One potential application for IR imaging is depth from stereo. Discerning depth from stereopsis is difficult because the quality of un-cooled sensors is not sufficient for generating dense depth maps. In this thesis, we investigate the production of sparse disparity maps from un-calibrated infrared stereo images and agree that a dense depth field may not be attained directly from IR stereo images, but perhaps a sparse depth field may be obtained that can be interpolated to produce a dense/semi-dense depth field. In our proposed technique, the sparse disparity map is produced by a robust features-based stereo matching method capable of dealing with the problems of infrared images, such as low resolution and high noise; initially, a set of stable features are extracted from stereo pairs using the phase congruency model, which contrary to the gradient-based feature detectors, provides features that are invariant to geometric transformations. Then, a set of Log-Gabor wavelet coefficients at different orientations and frequencies is used to analyze and describe the extracted features for matching. The resulted sparse disparity map is then refined by triangular and epipolar geometrical constraints. In densifying the sparse map, a watershed transformation is applied to divide the image into several segments, where the disparity inside each segment is assumed to vary smoothly. The surface of each segment is then reconstructed independently by fitting a spline to its known disparities; Experiments on a set of indoor and outdoor IR stereo pairs lend credibility to the robustness of our IR stereo matching and surface reconstruction techniques and hold promise for low-resolution stereo images which don’t have a large amount of texture and local details.