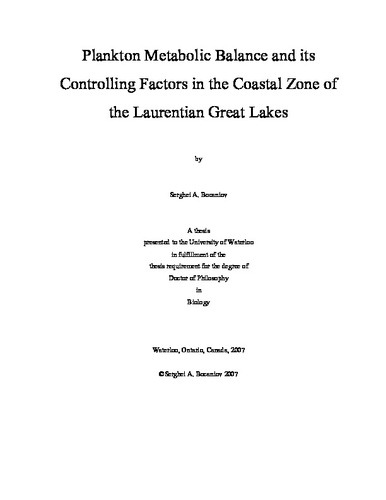 Plankton metabolic balance (PMBm) of the surface mixed layer was calculated as the ratio of areal rates of gross photosynthesis (AGP) to community respiration (AR), and estimated for four Laurentian Great Lakes coastal sites of contrasting physical, optical and nutrient regime: western Lake Ontario, Hamilton Harbour, Georgian Bay and Woods Bay. The applied methods were the oxygen light-and-dark bottle and 14C bottle methods as well as the oxygen stable isotope method (18O method). PMBm was net autotrophic in most of the cases (73% of the observations). Within- and inter-system variations in PMBm were heavily dependent on both a ratio of light-saturated photosynthesis to community respiration (Pmax/R) and a ratio of euphotic to mixing depths (Zeu/Zm). While short-term within-system variations in PMBm were driven by the interplay of chlorophyll a (Chl a), total phosphorus (TP) and Zeu/Zm ratio, its inter-lake long-term variability had a different behaviour. Average ratios of AGP/AR were dependent only on DOC or single physical parameters such as Zeu or Zm, while PMBm determined as the ratio between average AGP and AR was controlled by the joint effect of DOC, TP and Chl a. DOC affected average AGP/AR ratios primarily via its control over fluctuations of the physical environment and had a depressing effect on AGP rates but did not control rates of AR. Independent measurements of volumetric rates of photosynthesis (P) and community respiration (R) were made by 18O method adjusted for wind-driven gas exchange and compared against estimates from bottle estimates. The 18O method in Lake Ontario gave internally inconsistent results (e.g. negative absolute rates of P and R) and poor agreement with independent estimates of P, R and P/R despite superficially plausible estimates for P/R. The low productivity of Lake Ontario and frequent disturbances of water column masked the biological signal in both DO abundance and its isotopic signature, and thus invalidated the assumptions of steady state conditions. However, in Hamilton Harbour and some other relatively sheltered sites that were sampled occasionally, 18O method predicted absolute rates of P that were well correlated well with bottle estimates. Isotope model estimates for R and P/R in the harbour were not well correlated with bottle estimates but were of comparable magnitude on average, and differences were explicable in terms of physical forces and the different time scales of response for the two methods. The Hamilton Harbour hypolimnion presented an anomalous behavior in oxygen stable isotopes (18O depletion) where seasonal development of DO depletion was not accompanied by the progressive isotope enrichment expected from respiratory fractionation. The Lake Ontario and harbour hypolimnion results both appear to show that simple steady state models that assume literature values for fractionation processes and ignore physical dynamics are of limited applicability to lakes.

Serghei Bocaniov (2007). Plankton Metabolic Balance and its Controlling Factors in the Coastal Zone of the Laurentian Great Lakes. UWSpace. http://hdl.handle.net/10012/3393