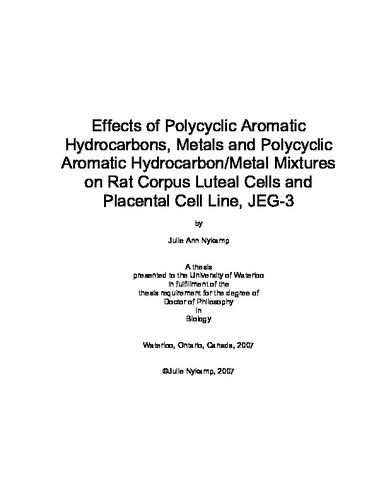 Polycyclic aromatic hydrocarbons (PAHs) are ubiquitous environmental contaminants that can be modified to oxygenated PAH (oxyPAHs) derivatives. It is well known that oxyPAHs tend to be much more reactive than their parent compounds. Toxicity can be attributed to direct interaction with target molecules or generation of reactive oxygen species (ROS). Metals are another class of contaminant found ubiquitously throughout the environment. Some metals are toxic at levels below the 1:1 ratio predicted by the biotic ligand model and are thought to manifest toxicity through ROS generation. Often metals and PAHs occur as co-contaminants in industrialized environments, yet little is known about their potential co-toxicity or mechanisms of action in mammalian reproductive function. Previously, we described that a PAH, 9, 10-phenanthrenequinone (PHEQ), inhibited LH-stimulated progesterone secretion in dispersed rat corpus luteal (CL) cells (Nykamp et al., 2001). Viability was decreased in CL cells exposed to PHEQ and 1,2-dihydroxy-anthraquinone (1,2-dhATQ), but not their parent compounds phenanthrene (PHE) or anthracene (ANT). Similarly, LH-stimulated progesterone production in CL cells was inhibited by PHEQ and 1,2-dhATQ, but not PHE. Further investigation revealed that PHEQ, but not PHE, ANT nor 1,2-dhATQ generated ROS in CL cells. Viability experiments were repeated using the choriocarcinoma cell line JEG-3 with similar results. Various metals were assessed for their toxicity to both CL and JEG-3 cells. The endpoints used to measure viability were metabolic activity and membrane integrity. In general, metabolic activity was a more sensitive indicator of toxicity than membrane integrity. The order of toxicity for metals in CL cells was Hg2+ > Cd2+ > Zn2+ > Ni2+ > Cu2+ for metabolic activity and Hg2+ ≈ Zn2+ > Cd2+ > Cu2+ > Ni2+ for membrane integrity. Only Hg2+ and Cu2+ were tested in JEG-3 cells. While Cu2+ was non-toxic, EC50s for Hg2+ metabolic activity and membrane integrity were 20 mM and 23 mM, respectively. Experiments were designed to study the mixtures of metals and PAHs on viability, ROS production, and LH-stimulated progesterone production in CL cells. Mixtures of each metal with either PHEQ or 1,2-dhATQ were incubated with CL cells and their effect on metabolic activity and membrane integrity assessed. Generally, most metal/oxyPAH mixtures displayed only additive toxicity. However, mixtures of Cu2+ and PHEQ showed synergistic toxicity to both metabolic activity and membrane integrity. Mixture studies in JEG-3 cells used only combinations of Cu2+ or Hg2+ with PHEQ or 1,2-dhATQ. Similar results to metabolic activity and membrane integrity in CL cells were observed. Mixtures of Cu2+ and PHEQ or 1,2-dhATQ were tested in CL cells for their effect on LH-stimulated progesterone secretion and ROS production. Additive effects were observed in both LH-stimulated progesterone secretion and ROS production for Cu2+/1,2-dhATQ mixtures while synergistic effects for both parameters were seen with Cu2+/PHEQ. Efforts to determine the site of action for mixtures of Cu2+/PHEQ involved adding the cholesterol analogue, 22-OH cholesterol (22-OHC) to CL cells in the absence of LH. Cytochrome P450 side-chain cleavage (CYP450scc) enzyme operates constitutively and the addition of 22-OHC to CL cells resulting in a 5-fold increase in progesterone production without added LH. Kinetic assays with 22-OHC show that while progesterone secretion was inhibited with PHEQ addition alone, a further significant reduction with both Cu2+ and PHEQ was not observed. The use of forskolin, an activator of adenylate cyclase, did not show any significant enhancement of progesterone secretion with the addition of Cu2+/PHEQ compared to PHEQ alone. The potential targets of Cu2+/PHEQ mixture include any step in the steroidogenic cascade from activation of protein kinase A onward with the proteins of the mitochondria, cytochrome P450 side chain cleavage enzyme and steroidogenic acute regulatory protein, being the most likely. Differential display polymerase chain reaction (ddPCR) was a molecular approach taken to determine the effect of PHEQ on JEG-3 gene expression. The genes whose expression appeared to be up-regulated with PHEQ exposure were serine protease inhibitor, Alu repeat sequence, heterogeneous ribonuclear ribonucleoprotein C (hnRNP C), eukaryotic translation initiation factor 3 (eIF3), nucleoporin-like protein, eukaryotic translation elongation factor 1a1 (eEF1 a 1), autophagy-linked FYVE domain (Alfy), spectrin, and proteasome. Apparent down-regulated genes in JEG-3 cells after PHEQ exposure included poly(ADP-ribose) polymerase 10 (PARP10), polyglutamine binding protein-1 (PQBP-1), heterogeneous ribonuclear ribonucleoprotein C (hnRNP C), eukaryotic translation initiation factor 5A (eIF5A), and keratin. In both cell types, oxyPAHs were more toxic than their parent compounds. Metals showed greater toxicity to metabolic activity than to membrane integrity. Of the combinations tested, only PHEQ and Cu2+ exhibited synergistic toxicity. ROS generation was the likely mechanism behind PHEQ/Cu2+ toxicity. Both cell types used represent critical roles in human reproductive health. The proper production of progesterone, a critical hormone for the maintenance of pregnancy in mammals, represents a unique endpoint for the assessment of toxicity. These results illustrate the need to study modified oxyPAHs, metals and metal/oxyPAH mixtures for their potential impact on human reproductive health.