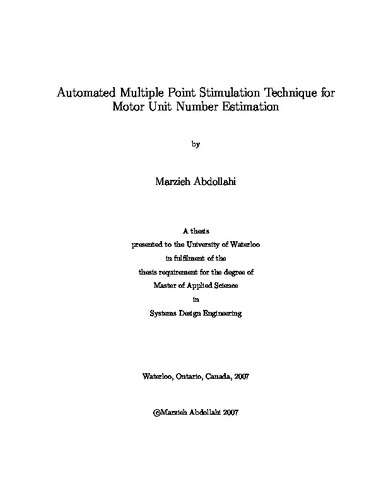 Motor unit number estimation (MUNE) is an electrodiagnostic procedure used to estimate the number of MUs in a muscle. In this thesis, a new MUNE technique, called Automated MPS, has been developed to overcome the shortcomings of two current techniques, namely MPS and MUESA. This method can be summarized as follows. First, a muscle is stimulated with a train of constant intensity current pulses. Depending on various factors, one to three MUs activate probabilistically after each pulse, and several responses are collected. These collected responses should be divided into up to 2^n clusters, such that each cluster represents one possible combination of n Surface-detected Motor Unit Potentials (SMUPs). After clustering the collected responses, the average response of each cluster is calculated, the outliers are excluded, and similar groups are merged together. Then, depending on the number of response set groups, a decomposition technique is applied to the response clusters to obtain the $n$ constituent SMUPs. To estimate the number of MUs, the aforementioned process is repeated several times until enough SMUPs to calculate a reliable mean-SMUP are acquired. The number of MUs can then be determined by dividing the maximal compound muscle action potential (CMAP) size by the mean-SMUP size. The focus of this thesis was on using pattern recognition techniques to detect n SMUPs from a collected set of waveforms. Several experiments were performed using both simulated and real data to evaluate the ability of Automated MPS in finding the constituent SMUPs of a response set. Our experiments showed that performing Automated MPS needs less experience compared with MPS. Moreover, it can deal with more difficult situations and detect more accurate SMUPs compared with MUESA.