Equilibrium and kinetic folding studies of two YchN-like proteins: the Tm0979 dimer and the Mth1491 trimer 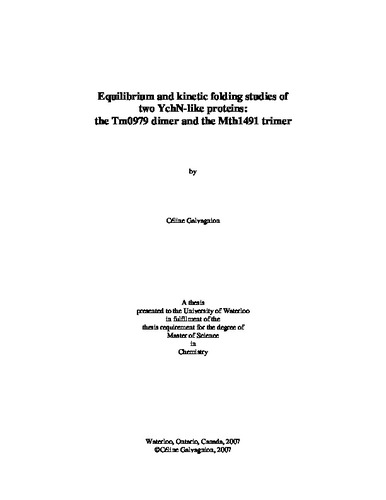 Proper folding of a protein to its native state is critical for the protein to be fully functional under biological conditions. Understanding protein folding and protein folding evolution within the same structural family are key to understand which processes assist or hinder protein folding and how to prevent misfolding. Tm0979 from Thermotoga maritima, Mth1491 from Methanobacterium thermoautotrophicum and YchN from Escherichia coli belong to the homologous superfamily of YchN-like proteins (SCOP and CATH: 3.40.1260.10). The structures of these proteins have been solved as part of structural proteomics projects, which consist of solving protein structures on a genome wide scale. In solution, Tm0979 forms a homodimer whereas Mth1491 folds as a trimer and YchN is a homohexamer. The structures of the individual monomeric subunits of these three proteins have high structural similarity, despite very low sequence similarity. The biological roles of these proteins are not yet well defined, but seem to be involved in catalysis of sulphur redox reactions. This thesis focuses on characterisation of the Tm0979 homodimer and the Mth1491 homotrimer, as well as the determination of the folding mechanisms of these two proteins. The folding mechanisms of the proteins are compared to each other and to the mechanisms of other dimeric and trimeric proteins. The evolution and basis of oligomeric structure within the YchN family are analyzed. Mutations of Tm0979 and Mth1491 are designed as a basis for future work to investigate processes responsible for switches in oligomeric protein quaternary.structure.