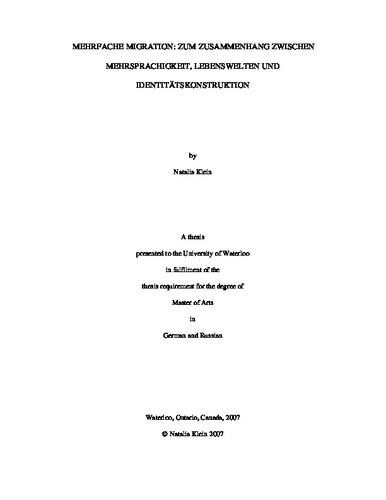 The qualitative case study on which this thesis is based was designed to investigate the relationship between migration and identity construction of three young people who immigrated as children and adolescents, two of them as refugees, from the former Yugoslavia to Germany and finally to Canada. The autobiographical narrative interviews of the manifold migration stories were mainly analyzed from the point of view of Vygotsky’s Sociocultural Theory, which considers speech and thought in a close relation, to illustrate how identity must be understood as both individual and social in nature, and as a complex narrative action. The socialization processes in all countries of migration were viewed in order to investigate how the previous acculturation affects the cultural identity of the young people today and how it is unfolded in the story. The study reveals that these subjects with threefold migration position themselves between their lifeworlds which enable them not only to say where they belong to or which is their homeland but to answer the simple question “Who am I?” This is revealed by the way of their narration which contains a lot of contradictions. The individuals deal differently with their dynamic identity construction, while one of them seems to suffer under the instability of his identity, and of being different in all his lifeworlds, other subjects however can see advantages related to it. The way how they deal with this dynamics has a crucial influence on their view of their migrations today and consequently on their identity construction as a narrative action.