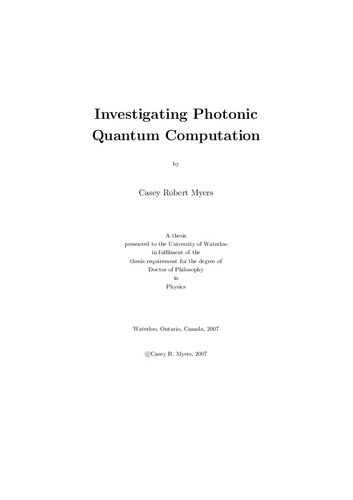 The use of photons as qubits is a promising implementation for quantum computation. The inability of photons to interact, especially with the environment, makes them an ideal physical candidate. However, this also makes them a difficult system to perform two qubit gates on. Recent breakthroughs in photonic quantum computing have shown methods around the requirement of direct photon-photon interaction. In this thesis we study three recently discovered schemes for optical quantum computation. We first investigate the so called linear optical quantum computing (LOQC) scheme, exploring a method to improve the original proposal by constructing a photon-number QND detector that succeeds with a high probability. In doing this we present a new type of LOQC teleporter, one that can detect the presence of a single photon in an arbitrary polarisation state when the input state is a sum of vacuum and multi-photon terms. This new type of teleporter is an improvement on the original scheme in that the entangled states required can be made offline with fewer entangling operations. We next investigate the so called quantum bus (qubus) scheme for photonic quantum computing. We show a scheme to measure the party of n qubit states by using a single qubus mode, controlled rotations and displacements. This allows for the syndrome measurements of any stabilizer quantum error correcting code. We extend these results to a fault tolerant scheme to measure an arbitrary Pauli operator of weight n, incorporating so called single bit teleportations. We investigate the construction of a Toffoli gate by using a single qubus mode, controlled rotations and displacements that works with a success probability of at least 25%. We also investigate the use of single bit teleportations to construct a universal set of gates on coherent state type logic and in the construction of cluster states. We finally investigate the optical Zeno gate, a gate that uses the Zeno effect in the form of two photon absorbers to induce a CSIGN. We model realistic two photon absorption and include realistic single photon loss for this gate, examining the use of encoding to overcome the single photon loss, showing that our results are competitive with the leading equivalent LOQC scheme.