The Physical Underpinning of Security Proofs for Quantum Key Distribution 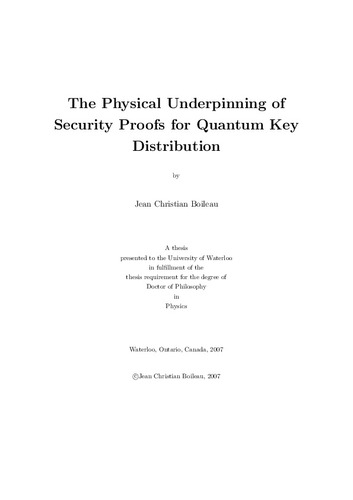 The dawn of quantum technology unveils a plethora of new possibilities and challenges in the world of information technology, one of which is the quest for secure information transmission. A breakthrough in classical algorithm or the development of a quantum computer could threaten the security of messages encoded using public key cryptosystems based on one-way function such as RSA. Quantum key distribution (QKD) offers an unconditionally secure alternative to such schemes, even in the advent of a quantum computer, as it does not rely on mathematical or technological assumptions, but rather on the universality of the laws of quantum mechanics. Physical concepts associated with quantum mechanics, like the uncertainty principle or entanglement, paved the way to the first successful security proof for QKD. Ever since, further development in security proofs for QKD has been remarkable. But the connection between entanglement distillation and the uncertainty principle has remained hidden under a pile of mathematical burden. Our main goal is to dig the physics out of the new advances in security proofs for QKD. By introducing an alternative definition of private state, which elaborates the ideas of Mayers and Koashi, we explain how the security of all QKD protocols follows from an entropic uncertainty principle. We show explicitly how privacy amplification protocol can be reduced to a private state distillation protocol constructed from our observations about the uncertainty principle. We also derive a generic security proof for one-way permutation-invariant QKD protocols. Considering collective attack, we achieve the same secret key generation rate as the Devetak-Winter's bound. Generalizing an observation from Kraus, Branciard and Renner, we have provided an improved version of the secret key generation rates by considering a different symmetrization. In certain situations, we argue that Azuma's inequality can simplify the security proof considerably, and we explain the implication, on the security level, of reducing a QKD protocol to an entanglement or a more general private state distillation protocol. In a different direction, we introduce a QKD protocol with multiple-photon encoding that can be implemented without a shared reference frame. We prove the unconditional security of this protocol, and discuss some features of the efficiency of multiple-photon QKD schemes in general.