Inducing Slips of Action: Creating a Window Into Attention Failures 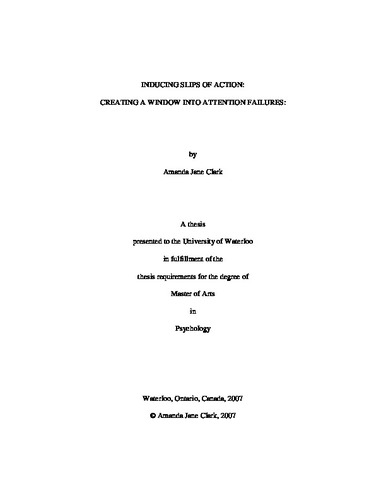 Many of our daily activities are achieved through goal-oriented routines which illustrates the adaptability and efficiency of information processing. Nevertheless, slips of action do occur. This study was designed to determine if slips of action can be induced in a well learned task and if so, how these slips affect specific indicators of task performance. Thirty (12 male) right-handed undergraduate participants were taught, with arrow cues, a sequence of dominant hand movements. Following this learning phase, a portion of the sequences were altered by either changing the spatial location of the arrow cue or by changing the actual movement goal. Results revealed that participants made numerous action slips which were most prevalent when the movement goal was altered. This suggests that participants were unable to disengage their expected movement plan and thus were vulnerable to errors. In addition to exploring the frequency of action slips we also looked at participants’ reaction and movement times on trials that preceded and followed errors and found that a speed-accuracy trade-off could not account for the slips. We also showed that frequency of slips on our task could reliably predict performance on the SART, a measure of inhibitory control, and the frequency of attention failures in daily living on the ARCES. Overall, the results of this study reveal that action slips can be induced by manipulating a well learned action routine and that the frequency of these induced slips reflects a participant’s tendency to commit action slips in everyday life.