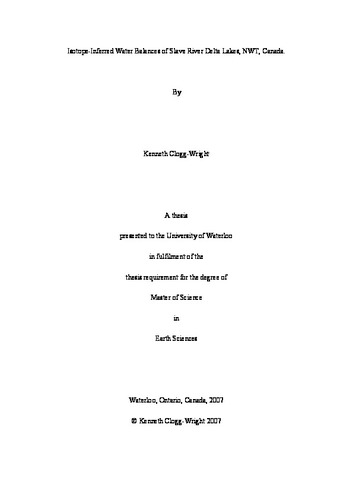 The use of the stable isotopes, 18O and 2H, has proven to be a valuable tool in determining the importance of various hydrological controls on the modern water balances of Slave River Delta lakes, NWT, Canada. Samples collected during the 2002 and 2003 field season have shown that delta lakes exhibit highly systematic isotopic variability over the entire delta. The major influences observed to be affecting Slave River Delta lakes include spring snowmelt runoff, flood events from the Slave River, seiche events from Great Slave Lake and thaw season precipitation events. An important component of Slave River Delta lake modern water balances is evaporation, the main controlling factor of water loss in the study lakes, as well as isotopic variability experienced throughout the entire delta during the ice-off season. Flood events from Great Slave Lake and the Slave River play a key role in controlling modern water balances and isotopic compositions of lakes in the delta. Levee height throughout the delta seems to strongly affect local hydrology, with areas having the greatest levee heights also having the most enriched lake water compositions, and areas having the lowest levee heights having the most depleted isotopic signatures. Outer delta and mid-delta lakes experience the greatest amount of flooding during the spring. Lakes that are affected by spring flood events have a more depleted isotopic signature than those lakes in the upper delta. Discrepancies between δ18O- and δ2H-derived E/I ratios have been effectively reconciled by incorporating site-specific information into the mass balance equations, and allowing mixing between Great Slave Lake (GSL) vapour δE, a large body of water adjacent to the delta and advected atmospheric vapour δA. The use of locally derived parameters also ensures a more accurate depiction of local conditions. Good correlation can be observed during July 2003, between mixing of GSL vapour and atmospheric moisture, when the lakes water balances were solely affected by evaporation. The mixing ratios obtained from two of the study lakes suggest that 5 – 16% of ambient atmospheric moisture was derived from Great Slave Lake.