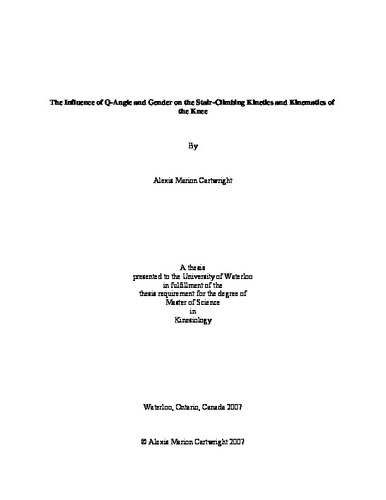 Background: Knee joint motion and quadriceps activity play a crucial role in all lower limb tasks, especially those which are highly dynamic and weight-bearing. Due to anatomical differences between men and women such as height, leg length, and hip width, alignment and mechanics of the lower limb are different between males and females. An anatomical variable which is associated with alignment in the lower limb is the quadriceps muscle angle (q-angle). The purpose of this study is to determine if there is a relationship between q-angle, activity of the quadriceps and hamstring muscles and the kinetics and kinematics of the knee during stairclimbing. An investigation on the reliability of q-angle measurements was also made prior to the primary study. Methods: To test the interclass reliability of q-angle measurements, three individuals measured the q-angle on 20 subjects. The primary researcher measured the same twenty individuals on three separate days to determine intra-rater reliability. The primary study involved 10 male and 10 female subjects completing 20 stair-climbing trials (10 ascent, 10 descent). Kinematic and kinetic data were collected on the lower limbs as well as electromyography (EMG) on two quadriceps muscles and one hamstring muscle. Knee joint peak and occurrence of peak moments, average EMG amplitude and peak and occurrence of peak EMG were analyzed by gender and high and low q-angle. A two way analysis of variance (ANOVA) was used to test the statistical significance of each measured variable (alpha = 0.05). Results & Discussion: The inter-rater reliability for q-angle was low (0.27-0.78) but the intrarater reliability showed q-angle measurements to be very reliable (0.80-0.95). For study 2, it was found that females had increased vastus lateralis and vastus medialis peak EMG and average EMG amplitudes for stair ascent and descent compared to males. Furthermore, for descent only, females demonstrated having delayed occurrence of peak EMG for vastus lateralis and biceps femoris, and exhibited an increased peak knee extension moment and a decreased peak knee adduction moment compared to males. For q-angle, there was a significant difference found for biceps femoris occurrence of peak EMG during descent, with the high q-angle group having delayed occurrence of peak. For ascent, the high q-angle group had significantly increased average vastus lateralis EMG and an earlier occurrence of knee abduction moment. Q-angles were found to be higher for women compared to men. Conclusion: This study confirms that gender differences do exist in knee moment and thigh EMG parameters with stair ascent and stair descent. With the high incidence of significant findings for the quadriceps muscle, further investigation is warranted to determine if a relationship does exist between q-angle and knee joint function. It would also be recommended that hip mechanics be included in future studies due to the difference seen in adduction moments at the knee.

Alexis Marion Cartwright (2007). The Influence of Q-Angle and Gender on the Stair-Climbing Kinetics and Kinematics of the Knee. UWSpace. http://hdl.handle.net/10012/3355