Weaving and identity of the Atayal in Wulai, Taiwan 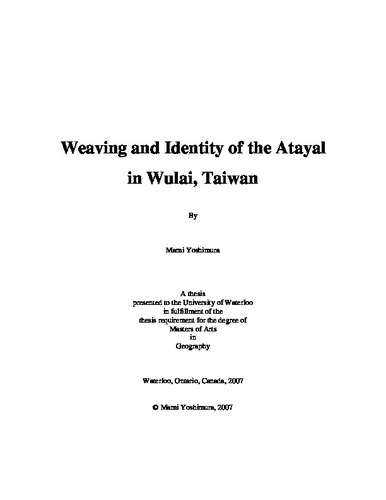 Using a feminist approach in a postcolonial setting, the interactions between weaving, identity, gender, tourism development, and post-colonial history are explored. This ethnographic research is focused on the indigenous female weavers in Wulai, Taiwan who have experienced both colonialism and tourism development. During Japan’s occupation, the Atayal – one of twelve indigenous groups in Taiwan – were forced to abandon their most important socio-cultural activities: facial tattooing, headhunting, and weaving. The Atayal lost most of their original textiles because many of them were taken to Japan. Today, these textiles are preserved in a few Japanese museums. Meanwhile, in Taiwan, the Atayal’s textiles are now reconstructed by the hands of some indigenous women in Wulai who weave primarily for museums. Others, on the other hand, weave for domestic tourists although they have little success in competition with less expensive Han Chinese' factory-made woven products. The reintroduction of weaving not only required the Atayal weavers to retrace their weaving history and to reconstruct and revive lost skills but also opened up a new opportunity to create new motifs with imported looms. The reintroduction of weaving has had multiple effects on the Atayal community. The meaning of weaving has changed from the representation of the Atayal women’s gender identity alone to the representation of the Atayal’s collective ethnic identity as a whole. Now the Atayal proudly claim their weaving culture as a part of their ethnic identity. It has become an ethnic symbol and a tourism product. However, the indigenous residents of Wulai are now barely involved directly with tourism business although symbols of their identity are used to promote tourism.