BELIEVABLE BUT NOT MEMORABLE: EXAMINING THE INTERACTION BETWEEN THE BELIEVABILITY AND MEMORABILITY OF EVIDENCE AS IT AFFECTS INFERENCES 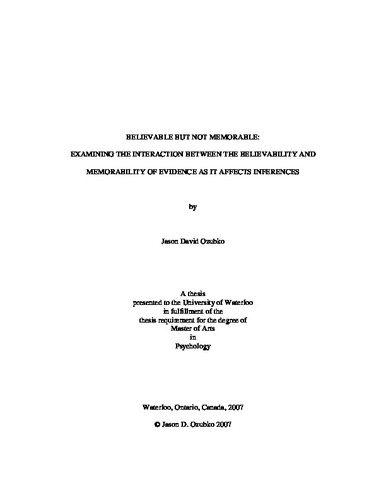 Dual-process theories of reasoning (e.g., Gilbert, 1991; Stanovich & West, 1997) posit that decisions are mediated by two cognitive systems: a fast and automatic system which sometimes relies on past knowledge, and a conscious and effortful system which is more likely to adhere to the rules of logic. Dual-process accounts of memory (e.g., Joordens & Hockley, 2000) suggest that memory is influenced by two cognitive systems: a fast and automatic familiarity component, and a conscious and effortful recollection component. Both accounts suggest that cognition relies on two underlying systems, which are described similarly in the two literatures, suggesting some form of convergence in these two areas of research. Memory research may therefore be informed by considering decision making research, and vice versa. Combining these two theoretical perspectives, it follows that believable evidence should be less memorable than unbelievable evidence due to its shallow initial processing. Despite this fact however, when inferences are being made based on evidence retrieved from memory, believable evidence should actually have a larger impact than it does when it is provided online, whereas no change or a lesser impact should be noted for unbelievable evidence. Across 3 experiments these predictions are validated, suggesting that the impact of evidence on inferences depends not only on the believability of that evidence, but also on whether the decision is being made online or from memory. Specifically, memory-based inferences exaggerate the influence of believable but not unbelievable evidence, despite the fact that unbelievable evidence is more memorable.

Jason David Ozubko (2007). BELIEVABLE BUT NOT MEMORABLE: EXAMINING THE INTERACTION BETWEEN THE BELIEVABILITY AND MEMORABILITY OF EVIDENCE AS IT AFFECTS INFERENCES. UWSpace. http://hdl.handle.net/10012/3348