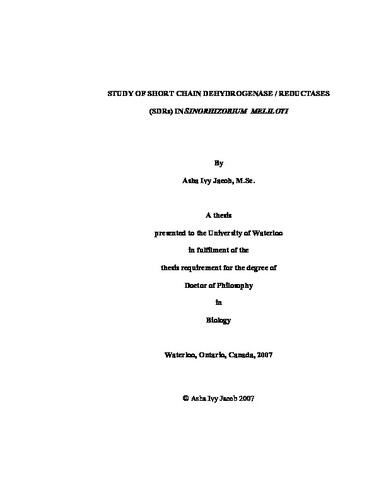 Sinorhizobium meliloti maintains a complex lifestyle, including saprotrophy, rhizophere colonization and root hair infection leading to the formation of root nodules in which the plant provides sustenance in return for nitrogen fixation. S. meliloti cells use a variety of carbon substrates for growth; this omnivory probably contributes to competitive ability in the soil. Several candidates for contribution to the catabolic capacity are found within the family of short chain dehydrogenases /reductases (SDR), which catalyze NAD(P)(H) dependent oxidation / reduction reactions. The 6.7 Mb genome of S. meliloti contains 78 SDR-encoding genes distributed on all three replicons. In this work each of these genes were disrupted by single crossover mutagenesis. These mutants were screened for growth on 93 different compounds as carbon source, and phenotypes were found for 17 of the mutants, providing suggestions for potential substrates of the corresponding enzymes. Carbon sources for which phenotype was observed include sugar alcohols, leucine, lysine, ornithine, galactitol, rhamnose, arabinose, mono-methyl succinate and ribono-γ-lactone. In addition, one of the mutants was found to be a proline auxotroph. In several cases, the phenotypes were consistent with the phenotypes of deletion mutants in which large sections of pSymB were absent. Eight of the mutants exhibited symbiotic deficiency after inoculation of alfalfa, while viable cells of three of the mutants could not be isolated from the nodules even though nitrogen fixation occurred. The results suggest that the corresponding SDR enzymes are involved in a pathway that is required for maintenance of viability by cells throughout infection and nodule development. This work demonstrates that members of the SDR family contribute to both the catabolic capacity and the symbiotic interactions of S. meliloti. Further experiments will address the details of the biochemical pathways involved. Knowledge of the substrate specificities of these enzymes should also prove informative in the description and annotation of orthologs that are identified in other genome sequences.