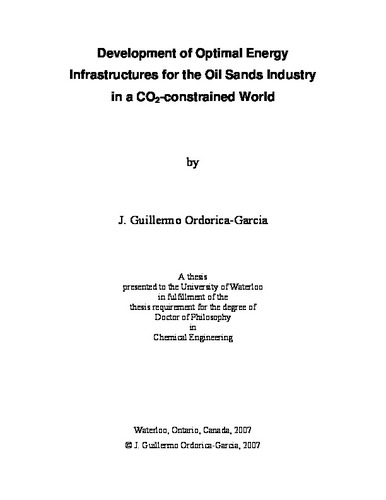 Western Canadian bitumen is becoming a predominant source of energy for North American markets. The bitumen extraction and upgrading processes in the oil sands industry require vast quantities of energy, in the form of power, H2, steam, hot water, diesel fuel, and natural gas. These energy commodities are almost entirely produced using fossil feedstocks/fuels, which results in significant CO2 atmospheric emissions. CO2 capture and storage (CCS) technologies are recognized as viable means to mitigate CO2 emissions. Coupling CCS technologies to H2 and power plants can drastically reduce the CO2 emissions intensity of the oil sands industry. The CO2 streams from such plants can be used in Enhanced Oil Recovery, Enhanced Coal Bed Methane, and underground CO2 storage. The above CO2 sinks currently exist in Alberta and roughly half of its territory is deemed suitable for geological storage of CO2. This study investigates the relationship between energy demands, energy costs and CO2 emissions associated with current and proposed oil sands operations using various energy production technologies. Accordingly, two computer models have been developed to serve as energy planning and economic optimization tools for the public and private sectors. The first model is an industry-wide mathematical model, called the Oil Sands Operations Model (OSOM). It serves to quantify the demands for power, H2, steam, hot water, process fuel, and diesel fuel of the oil sands industry for given production levels of bitumen and synthetic crude oil (SCO), by mining and/or thermal extraction techniques. The second model is an optimal economic planning model for large-scale energy production featuring CCS technologies to reduce CO2 emissions in the oil sands industry. Its goal is to feasibly answer the question: What is the optimal combination of energy production technologies, feedstocks, and CO2 capture processes to use in the oil sands industry that will satisfy energy demands at minimal cost while attaining CO2 reduction targets for given SCO and bitumen production levels? In 2003, steam, H2, and power production are the leading sources of CO2 emissions, accounting for approximately 80% of the total emissions of the oil sands industry. The CO2 intensities calculated by the OSOM range from 0.080 to 0.087 tonne CO2 eq/bbl for SCO and 0.037 tonne CO2 eq/bbl for bitumen. The energy costs in 2003 are $13.63/bbl and $5.37/bbl for SCO and bitumen, respectively. The results from the OSOM indicate that demands for steam, H2, and power will catapult between 2003 and 2030. Steam demands for thermal bitumen extraction will triple between 2003-2012 and triple again between 2012-2030. The H2 demands of the oil sands industry will triple by 2012 and grow by a factor of 2.7 thereafter. Power demands will roughly double between 2003 and 2012 and increase by a factor of 2.4 by 2030. The optimal energy infrastructures featured in this work reveal that natural gas oxyfuel and combined-cycle power plants plus coal gasification H2 plants with CO2 capture hold the greatest promise for optimal CO2-constrained oil sands operations. In 2012, the maximum CO2 reduction level attainable with the optimal infrastructure is 25% while in 2030 this figure is 39% with respect to “business as usual” emissions. The optimal energy costs at maximum CO2 reduction in 2012 are $21.43/bbl (mined SCO), $22.48/bbl (thermal SCO) and $7.86/bbl (bitumen). In 2030, these costs are $29.49/bbl (mined SCO), $31.03/bbl (thermal SCO), and $10.32/bbl (bitumen). CO2 transport and storage costs account for between 2-5% of the total energy costs of SCO and are negligible in the case of bitumen. The optimal energy infrastructures are mostly insensitive to variations in H2 and power plant capital costs. The energy costs are sensitive to changes in natural gas prices and insensitive to changes in coal prices. Variations in CO2 transport and storage costs have little impact on SCO energy costs and a null impact on bitumen energy costs. Likewise, all energy costs are insensitive to changes in the length of the CO2 pipeline for transport.