The influence of body mass on posture, pressure distribution and discomfort during prolonged driving. 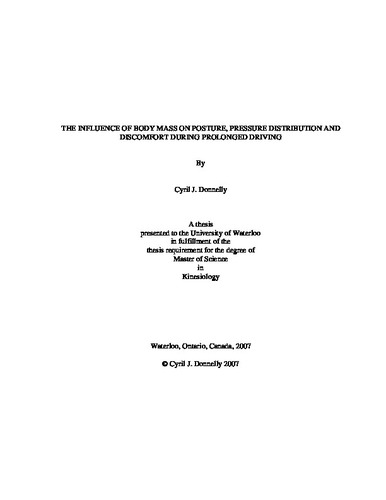 Background: Currently, if traveling the posted speed limit, the typical commuter driver in the Toronto Metropolitan area will travel round trip upwards of 60 minutes a day to work (Heisz and LaRochelle-Cote, 2005). As urban congestion continues to rise, commuting distances and times will progressively increase, placing commuter drivers at increased risk of developing musculoskeletal disorders (Porter and Gyi, 2002; Walsh et al., 1989; Chen et al., 2005; Sakakibara et al., 2006). As urban areas continue to expand, it is believed that a greater percentage of our urban populations will be defined as overweight or obese (Puska et al., 2003). To date the influence of body mass on driver posture, pressure distribution and discomfort during a prolonged driving situation has been left relatively untested. The purpose of this investigation is to determine the influence body mass has on driver posture, pressure distribution and discomfort during a prolonged driving situation. Methodology: Twelve male and 12 female participants, between 167 and 172 cm in stature were used in this investigation. Even numbers of males were assigned to either a light (51.3-57.7 kg), moderate (63.7-69.4 kg), or heavy (82.7-92.0 kg) body mass group. Participants were than placed in a 2 hour in lab driving simulation. During the simulation, lumbar flexion, pelvic angle, joint/segment angles, pressure distribution and discomfort were recorded. A three way mixed general linear model was used to determine if significant (α = 0.05) differences in discomfort, posture and/or interface pressure measurements existed over time. Results: Heavy drivers displayed increased total IT pressures and total seat pan/back pressures during driving. When normalizing these total pressures to area, differences in total IT pressure recorded from the seat pan, and total pressure recorded from the seat back were not significantly different (α = 0.05) across body mass groups. Due to the lack of seat pan accommodation with respect to surface area, the heavy body mass group’s total pressures per unit area for the seat pan was elevated relative to the lighter body mass groups. No differences in two-dimensional joint or segment kinematics and ratings of perceived discomfort were observed between body mass groups or between genders. Gender specific lumbo-pelvic postures and pressure distribution profiles were observed. Conclusion: With appropriate design of the seat pan to accommodate heavy body mass populations with respect to seat pan area, the influence of body mass as a potential risk factor in the development of discomfort would be reduced. With stature and body mass controlled between gender groups, biomechanical differences in both pressure distribution and lumbo-sacral postures were observed between males and females, verifying gender as a risk factor in the development of discomfort during prolonged driving. Recommendations to car seat manufacturers to recognize gender and body mass as important variables in the design of a car seat should be made.