An apparatus for studying interactions between Rydberg atoms and metal surfaces 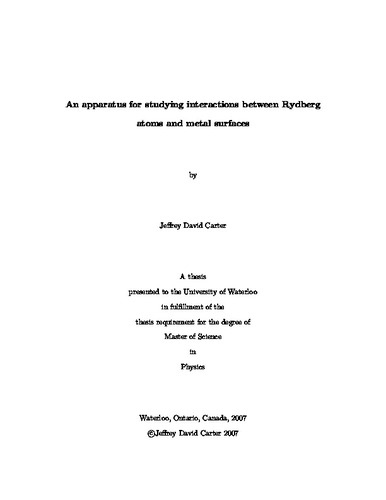 A system suitable for studying interactions between ⁸⁷Rb Rydberg atoms and metal surfaces has been constructed. This thesis describes the design and construction of the apparatus, and some test results. Atoms in a vapor cell magneto-optical trap are transferred to a macroscopic Ioffe-Pritchard trap, where they will be RF evaporatively cooled and loaded into a magnetic microtrap (atom chip). Confinement of cold clouds at controllable distances (5–200 μm)} from a metal surface is possible. The effects of atom-surface interactions can be studied with Rydberg atom spectroscopy. Some functionality of the apparatus has been demonstrated. Approximately 1.5×10⁷ atoms were loaded into a mirror MOT, and about 6×10⁶ atoms were optically pumped to the |F=2, m_F=2> hyperfine ground state and confined in a macroscopic Ioffe-Pritchard trap. The temperature of the cloud in the trap was 42 ± 5 μK, and the 1/e lifetime is 1–1.5 s. Forced RF evaporation has been used to measure the magnetic field at the trap minimum, but RF evaporative cooling has not yet been demonstrated.