The Clark-Ocone formula and optimal portfolios 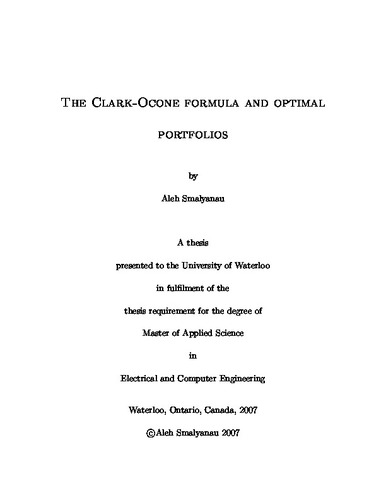 In this thesis we propose a new approach to solve single-agent investment problems with deterministic coefficients. We consider the classical Merton’s portfolio problem framework, which is well-known in the modern theory of financial economics: an investor must allocate his money between one riskless bond and a number of risky stocks. The investor is assumed to be "small" in the sense that his actions do not affect market prices and the market is complete. The objective of the agent is to maximize expected utility of wealth at the end of the planning horizon. The optimal portfolio should be expressed as a ”feedback” function of the current wealth. Under the so-called complete market assumption, the optimization can be split into two stages: first the optimal terminal wealth for a given initial endowment is determined, and then the strategy is computed that leads to this terminal wealth. It is possible to extend this martingale approach and to obtain explicit solution of Merton’s portfolio problem using the Malliavin calculus and the Clark-Ocone formula.