The Measure Of Meaning 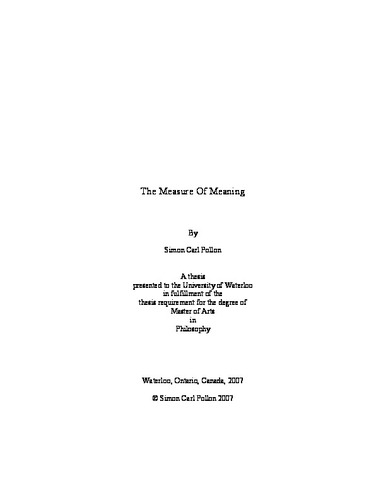 There exists a broad inclination among those who theorize about mental representation to assume that the meanings of linguistic units, like words, are going to be identical to, and work exactly like, mental representations, such as concepts. This has the effect of many theorists applying facts that seem to have been discovered about the meanings of linguistic units to mental representations. This is especially so for causal theories of content, which will be the primary exemplars here. It is the contention of this essay that this approach is mistaken. The influence of thinking about language and mental representation in this way has resulted in the adoption of certain positions by a broad swathe of theorists to the effect that the content of a concept is identical to the property in the world that the concept represents, and that because of this a concept only applies to an object in the world or it does not. The consequences of such commitments are what appear to be insoluble problems that arise when trying to account for, or explain, misrepresentation in cognitive systems. This essay presents the position that in order to actually account for misrepresentation, conceptual content must be understood as being very much like measurements, in that the application of a content to an object in the world is akin to measuring said object, and that conceptual content ought be understood as being graded in the same way that measurements are. On this view, then, concepts are the kinds of things that can be applied more, or less, accurately to particular objects in the world, and so are not identical to whatever it is that they represent.