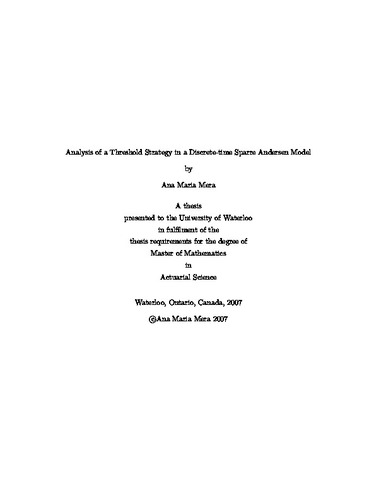 In this thesis, it is shown that the application of a threshold on the surplus level of a particular discrete-time delayed Sparre Andersen insurance risk model results in a process that can be analyzed as a doubly infinite Markov chain with finite blocks. Two fundamental cases, encompassing all possible values of the surplus level at the time of the first claim, are explored in detail. Matrix analytic methods are employed to establish a computational algorithm for each case. The resulting procedures are then used to calculate the probability distributions associated with fundamental ruin-related quantities of interest, such as the time of ruin, the surplus immediately prior to ruin, and the deficit at ruin. The ordinary Sparre Andersen model, an important special case of the general model, with varying threshold levels is considered in a numerical illustration.