On Algorithms, Separability and Cellular Automata in Quantum Computing 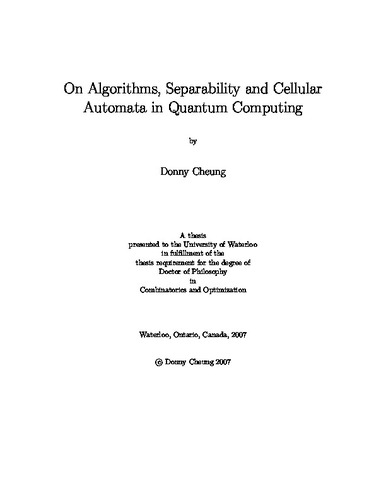 In Part I of this thesis, we present a new model of quantum cellular automata (QCA) based on local unitary operations. We will describe a set of desirable properties for any QCA model, and show that all of these properties are satisfied by the new model, while previous models of QCA do not. We will also show that the computation model based on Local Unitary QCA is equivalent to the Quantum Circuit model of computation, and give a number of applications of this new model of QCA. We also present a physical model of classical CA, on which the Local Unitary QCA model is based, and Coloured QCA, which is an alternative to the Local Unitary QCA model that can be used as the basis for implementing QCA in actual physical systems. In Part II, we explore the quantum separability problem, where we are given a density matrix for a state over two quantum systems, and we are to determine whether the state is separable with respect to these systems. We also look at the converse problem of finding an entanglement witness, which is an observable operator which can give a verification that a particular quantum state is indeed entangled. Although the combined problem is known to be NP-hard in general, it reduces to a convex optimization problem, and by exploiting specific properties of the set of separable states, we introduce a classical algorithm for solving this problem based on an Interior Point Algorithm introduced by Atkinson and Vaidya in 1995. In Part III, we explore the use of a low-depth AQFT (approximate quantum Fourier transform) in quantum phase estimation. It has been shown previously that the logarithmic-depth AQFT is as effective as the full QFT for the purposes of phase estimation. However, with sub-logarithmic depth, the phase estimation algorithm no longer works directly. In this case, results of the phase estimation algorithm need classical post-processing in order to retrieve the desired phase information. A generic technique such as the method of maximum likelihood can be used in order to recover the original phase. Unfortunately, working with the likelihood function analytically is intractable for the phase estimation algorithm. We develop some computational techniques to handle likelihood functions that occur in phase estimation algorithms. These computational techniques may potentially aid in the analysis of certain likelihood functions.