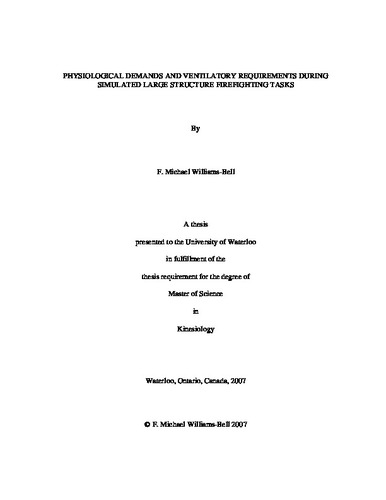 The ability to measure the physiological demands and air requirements during simulated firefighting tasks while wearing full personal protective ensemble (PPE) and positive pressure self-contained breathing apparatus (SCBA) has been a difficult process based on undeveloped technology. The capability of integrating a portable Cosmed K4b2 breath by breath gas collection system with a standard SCBA has permitted a novel approach to investigate metabolic demands and ventilatory requirements while breathing through the same system that would be used in an actual fire scene. The purpose of this study was to determine the physiological demands and air requirements during three large structure firefighting scenarios: (1) maximal high rise stair climb, (2) 5th floor high rise scenario, and (3) subway system scenario. The hypotheses were that (a) the 5th floor high rise scenario would be the most physically demanding and that (b) the years of service as a firefighter would result in decreased total air consumption during the three scenarios. Thirty-three male and three female healthy firefighters performed each of the three tasks at an equivalent pace similar to what would be expected at a fire scene. Scenario (1) consisted of stair climbing until consuming 55% of a typical SCBA air cylinder and then descending to a safe exit. Scenario (2) comprised a 5 floor stair climb, hose drag and room search, forcible entry, victim rescue drag, and 5 floor descent. Scenario (3) involved a stair descent, tunnel walk, portable ladder walk, ladder setup, victim rescue drag, tunnel walk, and stair ascent. Average maximum floors climbed for scenario (1) and mean completion times for scenarios (2) and (3) were 20 ± 2.5 floors, 5 min 3 s ± 57 s, and 12 min 5 s ± 1 min 10 s, respectively. Mean VO2 during each of the scenarios were 3168 ± 878 ml/min, 2947 ± 461 ml/min, 2217 ± 371 ml/min, corresponding to a relative VO2 of 35.5 ± 9.1 ml/kg/min, 33.1 ± 4.6 ml/kg/min, and 25.2 ± 4.6 ml/kg/min. In relation to the peak treadmill oxygen uptake, the three scenarios revealed that firefighters were working at 70 ± 10%, 65 ± 10%, and 49 ± 8% of VO2peak, respectively. Average heart rate values for the three scenarios were 170 ± 13 bpm, 160 ± 14 bpm, and 139 ± 17 bpm, corresponding to 88 ± 4%, 88 ± 6%, and 76 ± 7% of HRpeak, respectively. These results indicate that the most physiologically demanding scenario was the maximal stair climb, followed by the 5th floor high rise and subway system scenarios. Respiratory exchange ratio was consistently greater than 1.0 during the maximal stair climb and 5th floor high rise scenarios indicating that a considerable amount of energy was derived from anaerobic metabolism. With regards to the air requirements for each of the scenarios, total air consumption revealed averaged values of 74.9 ± 6%, 48.0 ± 7.0%, and 59.9 ±5.6%, of the air in a typical 30-min cylinder, respectively. These data also revealed that increasing age of the firefighter as well as increasing years of experience as a firefighter result in significant correlations with greater air consumption to complete the given task (p < 0.05). Contrary to the hypotheses, the maximal stair climb scenario appeared to be the most physically demanding while increased years of service as a firefighter resulted in greater air consumption. Furthermore, it appears that firefighters who are able to produce more power per kg of body mass have greater performance times and more efficient air consumption. These data are instrumental in quantifying the physiological demands and air requirements during simulated firefighting tasks while breathing on a positive pressure SCBA.