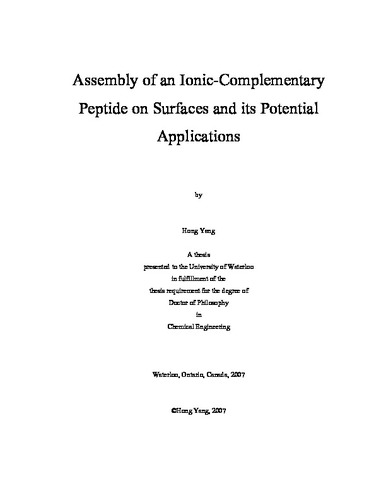 Self-assembling peptides have emerged as new nanobiomaterials and received considerable attention in the areas of nanoscience and biomedical engineering. In this category are ionic-complementary peptides, which contain a repeating charge distribution and alternating hydrophobic and hydrophilic residues in the amino acid sequence, leading to the unusual combination of amphiphilicity and ionic complementarity. Although their self-assembled nanostructures have been successfully applied as scaffoldings for tissue engineering, novel materials for regenerative medicine and nanocarriers for drug and gene/siRNA delivery, aspects of the assembly process remain unclear. Since many of these applications involve peptide-modified interfaces and surfaces, a better understanding and control of the peptide assembly on a surface are very crucial for future development of peptide-based applications in nano-biotechnology. This thesis contains two major parts: (i) fundamental study of the assembly of a model ionic-complementary peptide EAK16-II on surfaces and (ii) potential applications of such a peptide in surface modification and nanofabrication. In the fundamental study, EAK16-II assembly on negatively charged mica was first investigated via in-situ Atomic Force Microscopy (AFM). It was found that EAK16-II nanofiber growth on mica is surface-assisted and follows a nucleation and growth mechanism involving two steps: (i) adsorption of nanofibers and fiber clusters (from the bulk solution) on the surface to serve as the seeds and (ii) fiber elongation from the active ends of the seeds. Such a process can be controlled by adjusting the solution pH since it modulates the adsorption of the seeds and the growth rates. Unlike what is observed on mica, EAK16-II formed well-ordered nanofiber patterns with preferential orientations at angles of 60° or 120° to each other on hydrophobic highly ordered pyrolytic graphite (HOPG) surfaces, resembling the crystallographic structure of the graphite. Nanofiber formation on HOPG is also surface-assisted and adopts a nucleation and growth mechanism that can be affected by solution pH. The pH-dependent adsorption of peptides to HOPG is attributed to the resulting changes in peptide hydrophobicity. It was also found that EAK16-II assembly can be induced by the mechanical force of a tapping AFM tip. It occurs when the tip cuts the adsorbed EAK16-II nanofibers into segments that then serve as seeds for new nanofiber growth. This finding allows one to locally grow nanofibers at specific regions of the surface. The tip cutting has been combined with the effect that solution pH has on peptide assembly to develop a new AFM lithography method to fabricate local patterned peptide nanostructures on HOPG. To study the use of EAK16-II for surface modification applications, the wettability and stability of the peptide-modified surfaces were characterized. EAK16-II-modified mica becomes slightly hydrophobic as the water contact angle increases from <10° to 20.3 ± 2.9°. However, the hydrophobicity of the HOPG surface is significantly reduced, as reflected in a contact angle change from 71.2 ± 11.1° to 39.4 ± 4.3°. The EAK16-II-modified mica surface is stable in acidic solution, while the modified HOPG surface is stable in both acidic and alkaline solutions. The peptide-modified HOPG shows potential as a biocompatible electrode for (bio)molecular sensing. The ability of EAK16-II to form nanofibers on surfaces has also promoted research on peptide-based metallic nanowire fabrication. Our approach is to provide EAK16-II with metal ion binding ability by adding a GGH motif to the C-terminus. This new peptide EAK16(II)GGH has been found to form one-dimensional nanofibers while binding to Cu2+ ions. The dimensions of the nanofibers were significantly affected by the nature of the anions (SO42-, Cl- and NO3-) in the copper salt solution. This work demonstrates the potential usage of EAK16-II for nanowire fabrication.

Hong Yang (2007). Assembly of an Ionic-Complementary Peptide on Surfaces and its Potential Applications. UWSpace. http://hdl.handle.net/10012/3305