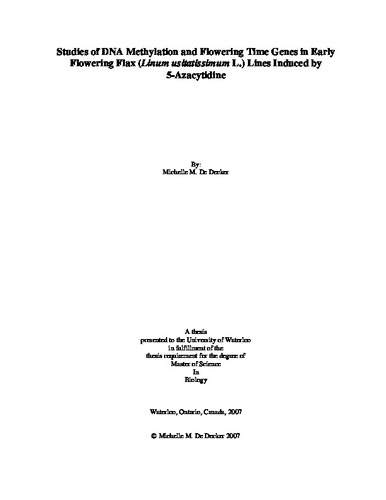 Pure-breeding, early-flowering lines of flax, derived from treatment of germinating seeds with 5-azacytdine in 1990, flower 7-13 days before controls, have fewer leaves, are shorter, and have hypomethylated total DNA, relative to control lines. This thesis examines the changes in DNA methylation levels in the cotyledons and shoot tips of early-flowering Royal flax lines (i.e. RE1 and RE2) and their control (RC) to determine the changes from 24 days to the onset of flowering (approximately 34 days in RE1 and RE2, and 52 days in RC). It also examines the question of whether DNA is methylated in the chloroplast genome of flax. Finally, the thesis looks at the differences in transcript abundance of the flowering genes LEAFY and TERMINAL FLOWER1 in RC and RE2. Methylation levels in RE1 and RE2 were found to be lower than in RC from 24 days of age to the onset of flowering and the levels of all three lines increase with tissue age and/or differentiation. In addition, buds of RE2 were hypomethylated relative to RC. If plants were placed in the dark prior to DNA extraction, hypomethylation was not seen in the total DNA of RE2. The chloroplast DNA of flax was found to be methylated, and RE2 chloroplast DNA was hypomethylated relative to RC. Differences in transcript levels of LFY were seen in RC and RE2 shoot tips, where a higher accumulation of transcript seen in RE2 compared to RC may be related to its earlier flowering time. In leaves, there was no significant difference in the transcript abundance of LFY between RC and RE2. TFL1 was detected in genomic DNA of RC and RE2; it was not detected in the cDNA of the two lines. In summary, compared to RC, hypomethylation was seen in the total DNA of RE2 plants grown under regular light conditions and the methylation levels in the all lines increased with age in shoot tips, cotyledons, and leaves. The chloroplast DNA of RE2 was also hypomethylated relative to that of RC. RE2 accumulated LFY transcript in shoot tips at flowering, which was not the case in RC. Although these ideas cannot be linked at this time, they are all likely related to the early-flowering phenotype.