Direct User Calls from the Kernel: Design and Implementation 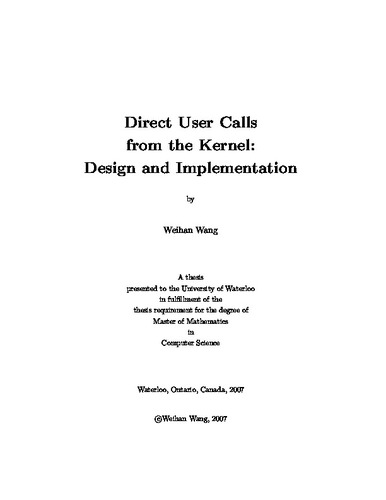 Traditional, general-purpose operating systems strictly separate user processes from the kernel. Processes can only communicate with the kernel through system calls. As a means to ensure system security, system calls inevitably involve performance overhead. Direct User Callback from the Kernel, or DUCK, is a framework that improves the performance of network-centric applications by executing a part of application code directly from inside the kernel. Because the code runs in kernel mode and can access kernel memory directly, DUCK is able to eliminate two important sources of system call overhead, namely mode switches and data copying. One issue with DUCK is how to design an application programming interface (API) that is general, efficient, and easy to use. In this thesis, we present the design of the DUCK API, which includes functions for both direct user code execution and zero-copy buffer management. We have implemented DUCK prototypes on the Solaris/SPARC platform. An efficient way to implement direct user code invocation is through memory sharing between the kernel and user processes. However, because Solaris/SPARC separates the user and kernel address spaces, achieving memory sharing is difficult. In the thesis, we study the SPARC architecture and the Solaris virtual memory subsystem, and discuss three potential approaches to support memory sharing required by DUCK. We proceed to present micro-benchmark experiments demonstrating that our DUCK prototype implementation is capable of improving the peak throughput of a simple UDP forwarder by 28% to 44%.