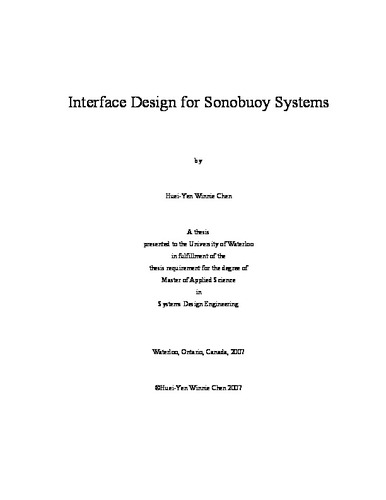 Modern sonar systems have greatly improved their sensor technology and processing techniques, but little effort has been put into display design for sonar data. The enormous amount of acoustic data presented by the traditional frequency versus time display can be overwhelming for a sonar operator to monitor and analyze. The recent emphasis placed on networked underwater warfare also requires the operator to create and maintain awareness of the overall tactical picture in order to improve overall effectiveness in communication and sharing of critical data. In addition to regular sonar tasks, sonobuoy system operators must manage the deployment of sonobuoys and ensure proper functioning of deployed sonobuoys. This thesis examines an application of the Ecological Interface Design framework in the interface design of a sonobuoy system on board a maritime patrol aircraft. Background research for this thesis includes a literature review, interviews with subject matter experts, and an analysis of the decision making process of sonar operators from an information processing perspective. A work domain analysis was carried out, which yielded a dual domain model: the domain of sonobuoy management and the domain of tactical situation awareness address the two different aspects of the operator's work. Information requirements were drawn from the two models, which provided a basis for the generation of various unique interface concepts. These concepts covered both the needs to build a good tactical picture and manage sonobuoys as physical resources. The later requirement has generally been overlooked by previous sonobuoy interface designs. A number of interface concepts were further developed into an integrated display prototype for user testing. Demos created with the same prototype were also delivered to subject matter experts for their feedback. While the evaluation means are subjective and limited in their ability to draw solid comparisons with existing sonobuoy displays, positive results from both user testing and subject matter feedback indicated that the concepts developed here are intuitive to use and effective in communicating critical data and supporting the user’s awareness of the tactical events simulated. Subject matter experts also acknowledged the potential for these concepts to be included in future research and development for sonobuoy systems. This project was funded by the Industrial Postgraduate Scholarships (IPS) from Natural Science and Engineering Research Council of Canada (NSERC) and the sponsorship of Humansystems Inc. at Guelph, Ontario.