INVESTIGATIONS OF KINETIC ASPECTS IN NITROXIDE-MEDIATED RADICAL POLYMERIZATION OF STYRENE 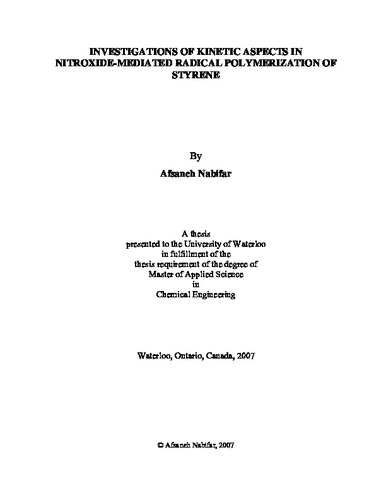 An experimental and modeling investigation of nitroxide-mediated radical polymerization (NMRP) of styrene using 2,2,6,6-tetramethyl-1-piperidinyloxy (TEMPO) as controller is presented. The objective was to examine the effect of temperature, controller to initiator molar ratio, and initiation mode on conversion, molecular weight and polydispersity development, and also to generate a source of reliable experimental data for parameter estimation and further model validation purposes. Polymerizations with a bimolecular initiator (Benzoyl Peroxide; BPO) were carried out at 120 and 130°C, with TEMPO/BPO molar ratios of 0.9 to 1.5. The effects of temperature and TEMPO/BPO ratio on polydispersity, molecular weight averages and conversion (rate) were studied. Results indicate that increasing temperature increases the rate of polymerization while the decrease in molecular weights is only slight. It was also observed that increasing the ratio of TEMPO/BPO decreased both the rate of polymerization and molecular weights. To investigate the contribution of thermal self-initiation in NMRP of styrene, thermal NMRP of styrene with TEMPO in the absence of initiator was carried out at 120 and 130°C. The results were compared with regular thermal polymerization of styrene and NMRP of styrene in the presence of BPO. It was observed that although the thermal polymerization of styrene can be controlled to some extent in the presence of TEMPO to provide lower polydispersity polystyrene, the polymerization was never as controlled as that obtained by a BPO initiated NMRP. Additional experiments were conducted with a unimolecular initiator and compared to the corresponding bimolecular system with the same level of nitroxide at 120°C, to gain additional insight on the advantages and disadvantages of each system. In addition, the importance of diffusion-controlled (DC) effects on the bimolecular NMRP of styrene was assessed experimentally by creating conditions where DC effects may be present from the outset. The results were corroborated by mathematical modeling and it was concluded that DC-effects are weak in the NMRP of styrene, even in the presence of “worst case scenario” conditions created. Finally, a mathematical (mechanistic) model based on a detailed reaction mechanism for bimolecular NMRP of styrene was presented and the predicted profiles of monomer conversion, molecular weight averages and polydispersity were compared with experimental data. Comparisons suggest that the present understanding of the reaction system is still inconclusive, either because of inaccuracy in values of kinetic rate constants used or because of some possible side reactions taking place in the polymerization system that are not included in the model. This was somewhat surprising, given that papers on controlled radical polymerization, and NMRP in particular, have clearly dominated the scientific polymer literature in the last fifteen years or so.