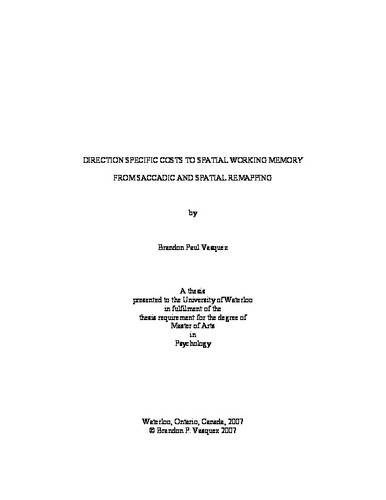 Right parietal lesions often lead to neglect, in which patients fail to attend to leftward stimuli. Recent models of neglect suggest that, in addition to attentional impairments, patients demonstrate impairments of spatial remapping and/or spatial working memory (SWM). Although spatial remapping could be considered a kind of spatial memory process itself (i.e., updating remembered locations based on anticipated saccade outcomes), the two processes operate on very different time scales (milliseconds versus seconds). In the present study, the influence of saccadic and spatial remapping on SWM was examined in healthy individuals. An initial control condition, in which participants had to respond to a probe stimulus (i.e., “is the probe in the location previously occupied by the target?”) following a 1500 ms delay, was contrasted with conditions in which the fixation point moved (left, right, up, or down) at the onset of the delay. In a second version of the task, participants made covert shifts of attention at delay onset requiring covert spatial, rather than saccadic, remapping. In both tasks SWM performance was best when no remapping was required. Decrements in SWM were largest overall in the spatial remapping task, whereas for both saccadic and spatial remapping, a consistent cost was observed for remapping the target array into right visual space. Results are discussed in terms of hemispheric biases in attention and differences in performance for peripersonal versus extrapersonal space.