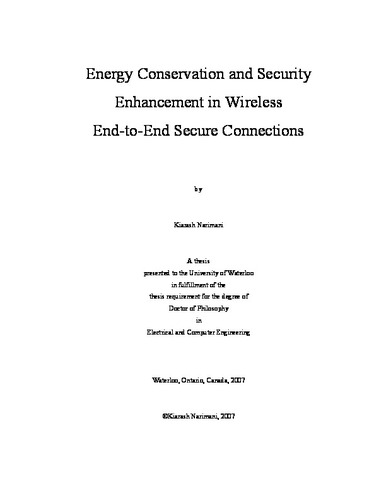 Wireless channels are vulnerable to interception. In some applications an end-to-end secure data transfer is required. However the use of cryptographic functions in communication over a wireless channel increases sensitivity to channel errors. As a result, the connection characteristics in terms of delay, throughput, and transmission energy worsen. Transmission energy is a key issue in some secure end-to-end wireless applications especially if they are running on mobile handheld devices with a limited source of energy such as batteries. That is why in most secure end-to-end wireless connections, the connection is dropped in poor channel conditions. In this thesis, models are proposed by which the performance is improved and transmission energy is lowered. A combination of a cross-layer controller, K Best Likelihood (K-BL) channel decoder, and a keyed error detection algorithm in the novel model supports the authorized receivers by a higher throughput, lower delay mean, and less transmission energy in a certain range of the Signal to Noise Ratio (SNR). This is done at the expense of additional computation at the receiving end. Ttradeoffs are examined and the simulation results of the new model are compared with those of conventional wireless communication systems. Another model is devised to mitigate the energy consumption of the Turbo Code channel decoder. The overall decoding energy consumption for each packet can be lowered by reducing the average number of iterations in the Turbo Code channel decoder. The proposed models achieve better energy consumption by reducing the number of iterations in a channel decoder that uses the Turbo decoder and by reducing the number of retransmissions in a trellis channel decoder. Furthermore, the security enhancement of the novel models is assessed in terms of the extent to which the enhancement is fully achieved.