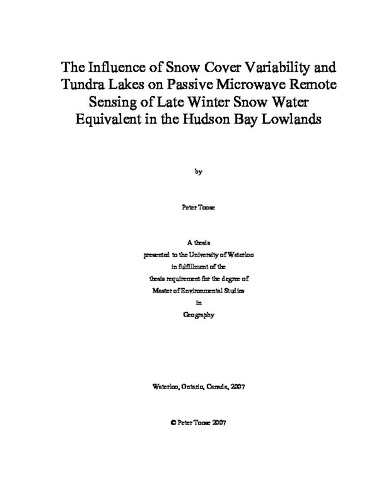 Current North American operational satellite passive microwave snow water equivalent (SWE) retrieval algorithms consistently underestimate SWE levels for tundra environments when compared to four years of regional snow surveys conducted in the Northwest Territories and northern Manitoba, Canada. Almost all contemporary SWE algorithms are based on the brightness temperature difference between the 37GHz and 19GHz frequencies found onboard both past and present spaceborne sensors. This underestimation is likely a result of the distribution and deposition of the tundra snow, coupled with the influence of tundra lakes on brightness temperatures at the 19GHz frequency. To better our understanding concerning the underestimation of passive microwave SWE retrievals on the tundra, Environment Canada collected in situ measurements of SWE, snow depth, and density at 87 sites within a 25km by 25km study domain located near Churchill, Manitoba in March 2006. Coincident multi-scale passive microwave airborne (70m & 500m resolution) and spaceborne (regridded to 12.5km & 25km resolution depending on frequency) data were measured at 6.9GHz, 19GHz, 37GHz and 89 GHz frequencies during the same time period. The snow survey data highlighted small-scale localized patterns of snow distribution and deposition on the tundra that likely influences current SWE underestimation. Snow from the open tundra plains is re-distributed by wind into small-scale vegetated features and micro-topographic depressions such as narrow creekbeds, lake edge willows, small stands of coniferous trees and polygonal wedge depressions. The very large amounts of snow deposited in these spatially-constrained features has little influence on the microwave emission measured by large-scale passive microwave spaceborne sensors and is therefore unaccounted for in current methods of satellite SWE estimation. The analysis of the passive microwave airborne data revealed that brightness temperatures at the 19GHz were much lower over some tundra lakes, effectively lowering SWE at the satellite scale by reducing the 37-19GHz brightness temperature difference used to estimate SWE. The unique emission properties of lakes in the wide open expanse of the tundra plains, coupled with an insensitivity to the large amounts of SWE deposited in small-scale features provides an explanation for current passive microwave underestimation of SWE in the tundra environment.