fashioning the distillery district: an architecture of spectacle and performance 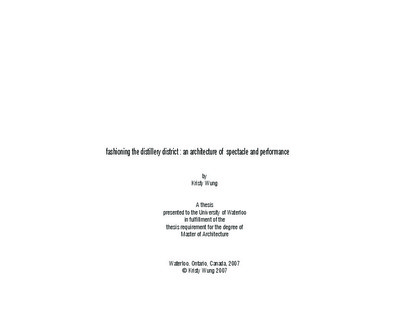 In the beginning there was cladding, first embraced by humans through the painting and tattooing of skin as a means of displaying one’s social position, tribal affiliation, or stage in life. Accompanied by the performance of ritual dances and movement, space was then engaged and the primitive realm of architecture was established. Thus commenced the intimate affair between fashion and architecture, a relationship that most architects have dismissed or even actively purged from their work. This thesis, however, attempts to view the two elements of architecture and fashion in a positive light, as cooperative facilitators of spectacle and event. Indeed, it is the themes of architecture, performance, and decoration that have fueled the design of a fashion school within the Distillery District. Riding the wave of what has been dubbed Toronto’s “architectural renaissance,” the proposed insertion of a fashion school in this distinct historical precinct further cultivates the district’s mission of revitalization. The design fosters a vital cultural and heritage destination while simultaneously creating a communal gathering place that gains meaning from human interaction. That is, the establishment of a cultural institution will further define the area as a forum of creativity and social engagement, stimulating both the immediate surroundings as well as the rest of the city.